"What happens when he gets out and accuses me of things that are completely untrue is that all of a sudden that kindles the crazies out there,” said Fauci 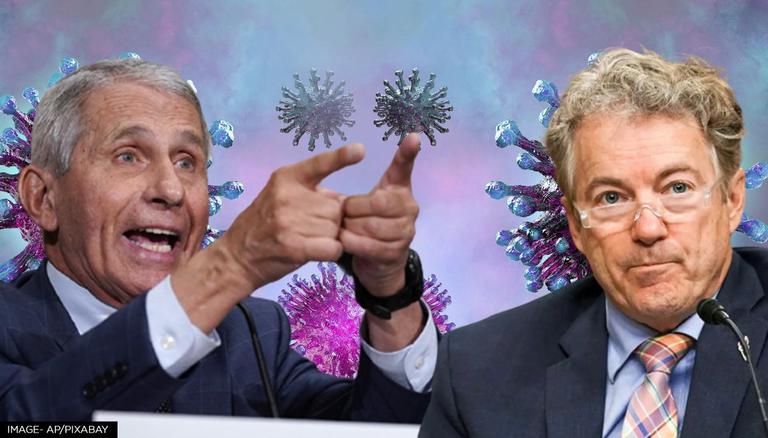 
US President Joe Biden’s top medical advisor and America’s prominent infectious diseases scientist Dr. Anthony Fauci on Tuesday slammed the vaccine skeptic Republican senator Rand Paul for “unleashing the crazies,” and hurtling the ‘death threats’ towards him and harassing his family in an emotional congressional testimony on Tuesday.

At the US Senate committee hearing on the government's response to the COVID-19 pandemic, Fauci and Senator had a fiery and heated exchange as the former accused the Republican Senator of "distorting everything” about him, spreading misinformation, and instigating the vaccine skeptics by launching threats of violence against him. Senator Paul accused Fauci of disagreeing with scientists over SARS-CoV-2 China lab leak theory, as he asked: “Do you think it’s appropriate to use your $420,000 salary to attack scientists that disagree with you?”

In the visuals of the hearing that emerged online, Fauci and Paul engaged in a rather vehement back-and-forth as America’s top infectious diseases expert was heard on a hot mic shouting to the GOP senator “you’re a moron.” His remarks followed after Sen. Rand Paul, R-Ky., accused him of disagreeing that the coronavirus originated in a lab in China.

Lambasting Paul, an ophthalmologist before he was elected to the US congress, Fauci said that the Republican senator was using such attacks against him for ‘political gain’. He went on to state that such claims result in death threats against him as he noted that a man was arrested last month in possession of an AR-15 rifle, who the police later said was driving to Washington DC with a ‘hit list’ that had his name on it.

Senator Paul and other Republican lawmakers have constantly questioned the COVID-19 measures, the science behind vaccines, and Fauci’s role behind the spread of the novel coronavirus. Paul at the hearing on Tuesday accused Fauci of a smear campaign against the conservatives who opposed the lockdown in the US in 2020. But Fauci derided the Republican from Kentucky saying that his unsubstantiated claims jeopardised his safety.

"When it comes to misinformation, Republicans on the committee clearly weren't trying to stop the spread," Ian Sams, a Department of Health and Human Services spokesman, said in a statement after the hearing.

"At a time when America is seeing rising COVID cases, it’s disappointing and frankly unacceptable that Republican Senators chose to spend a hearing with the country’s leading public health experts spreading conspiracy theories and lies about Dr. Fauci."

Paul showed a series of emails sent by Fauci as proof of his efforts for undermining the academicians. He claimed that Dr. Francis Collins, a former director of the National Institutes of Health, or NIH, and Fauci, both appeared to disagree with scientists who found that the coronavirus originated in a lab in China. The emails although depicted that he sent the colleagues a link to a Wired article that negated claims of "herd immunity."

READ | Omicron will 'find just about everybody' but vaccinated 'will still fare well', says Fauci

"You know, you're going back to that original discussion when I brought together a group of people to look at every possibility with an open mind," Fauci said in the hearing. "So you're not only distorting it, you are completely turning it around, as you usually do."

'I have threats upon my life, harassment of my family and my children,' says NIAID director

"What happens when he gets out and accuses me of things that are completely untrue is that all of a sudden that kindles the crazies out there,” said Fauci on Tuesday according to the Senate’s hearing broadcasts. He further stated that he has threats upon his life, harassment of his family and his children with obscene phone calls because people are lying about him. "We are here at a committee to look at a virus now that has killed almost 900,000 people and you keep coming back to personal attacks on me that have absolutely no relevance to reality," he iterated.

Senator Paul, meanwhile, backfired at Fauci and said, "You have politically attacked your colleagues in a politically reprehensible way.” Fauci accused Senator Paul of a smear campaign as he asked lawmakers to go to Rand Paul website that says 'Fire Dr. Fauci' and asks Americans to donate for the cause.  "Contribute here. You can do $5, $10, $20, $100,” Fauci lambasted the Senator, adding that he was making a catastrophic pandemic an element for his “political gain.” Paul told the committee: "Anyone who dares to question Fauci’s smear campaign against other scientists is accused by Fauci of fomenting violence."