South Korea’s Moon Jae-in said that the US has agreed to end the flight range guidelines that limited the country’s missiles to 800 kilometres. 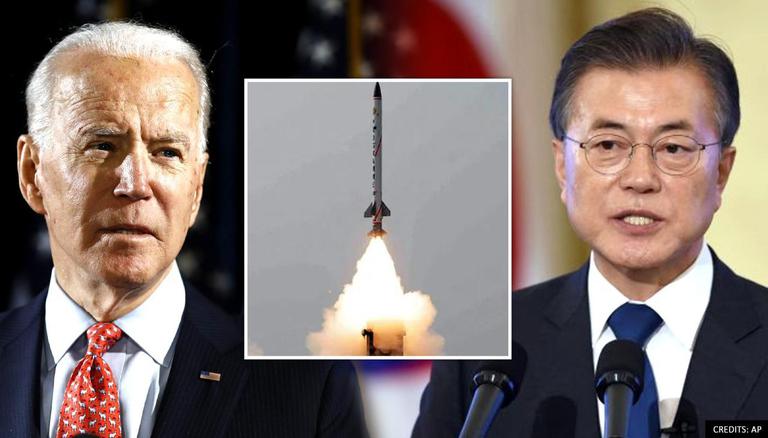 
In a joint press conference with US President Joe Biden, South Korea’s Moon Jae-in said that the United States has agreed to end the flight range guidelines that limited the country’s missiles to 800 kilometres. According to ANI, the missile guideline was issued in 1979 when South Korea was given US technologies and components for developing its own missiles. As a result of two guideline revisions in 2001 and 2002, the permitted range of South Korean missiles was increased from initial 180 kilometres to 300 kilometres and then 800 kilometres.

However, on May 21, South Korean President Moon said, “It is also with pleasure that I deliver the news on the termination of the revised missile guidelines”.

South Korean President Moon Jae-in arrived at the White House Friday afternoon for talks with President Joe Biden. The two leaders expressed deep concerns about the issue of the denuclearization of North Korea and agreed to further reinforce their combined defence posture. They also showed a willingness to reduce tensions via diplomatic measures, Biden said during the joint press conference.

In his statement, Biden said, "My team consulted closely with President Moon's team throughout the process of our DPRK [North Korea's foreign policy] review, and we both are deeply concerned about the situation. Our two nations also share a willingness to engage diplomatically with the DPRK to take pragmatic steps that will reduce tensions, as we move toward our ultimate goal of denuclearization of the Korean Peninsula”.

Further, Moon also shared his US counterpart’s concern and said that denuclearization is the most urgent task the two countries must undertake to ensure permanent peace in the Korean peninsula. Biden, on the other hand, mentioned he has appointed Ambassador Sung Kim, a career diplomat with deep policy expertise to serve the United States' next special representative for North Korea as diplomatic work begin to achieve full denuclearization. It is worth noting that the US and South Korea have worked closely during Biden’s administration review of US policy toward North Korea.

Moon and Biden expressed support for the inter-Korean dialogue and cooperation. Moreover, Biden and South Korea agreed to boost cooperation with the United States over the development of a leading-edge 5G network. Coordination on vaccine distribution, climate change and regional security concerns spurred by China was also discussed by the two leaders.