In a statement, the US Religious Freedom Body launched a strong statement against the communal violence in Bnagladesh & requested govt to ensure security. 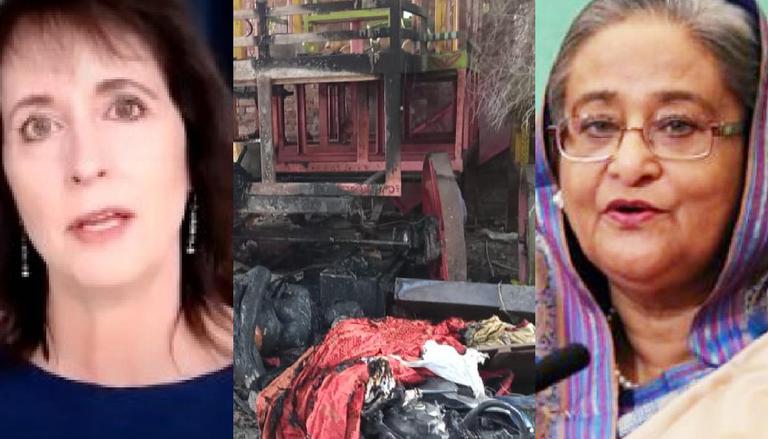 
The United States' Religious Freedom body has launched a strong statement against attacks on Hindus in Bangladesh. In its statement, the US Commission on International Religious Freedom (USCIRF) said that it is 'gravely troubled' and 'especially disturbed' by the 'widespread attacks and desecration of Hindu places of worship [in #Bangladesh]'. The attack by an angry mob during Durga Puja celebrations claimed the lives of at least six people including two Hindu devotees while several others have sustained critical injuries.

USCIRF urged the Bangladesh government to ensure the security of the minorities in the country and 'hold the perpetrators of these gruesome attacks responsible'.

USCIRF @CommrBhargava: "USCIRF urges the govt of #Bangladesh to safeguard the rights and security of Hindus and all religious communities in the country and hold the perpetrators of these gruesome attacks responsible." (2/2) https://t.co/JmzxB8JAKh

"We applaud Prime Minister Sheikh Hasina's response to the heinous crimes by sending paramilitary forces to contain violence. However, we continue to urge the Bangladeshi government to crackdown on extremist elements that fan anti-Hindu sentiments in the country," she said.

She further acknowledged that 'despite constitutional protections for religious freedom, the country’s religious minorities, including Hindus, Buddhists, and Christians, have continued to face various challenges to their freedom of religion or belief'.

US' earlier statements on Bangladesh violence

US Department of State spokesperson Ned Price, on Wednesday, said that the US condemn the attacks. “We condemn the recent violent attacks on Hindu temples and businesses in Bangladesh during the Durga Puja celebrations. Our thoughts are with the Hindu community as we urge authorities to investigate fully. Freedom of religion or belief is a human right,” he had tweeted.

A State Department spokesperson, on Tuesday, was quoted as saying, "Freedom of religion or belief is a human right. Every person around the world, regardless of their religious affiliation or belief, should feel safe and supported to celebrate important holidays. The State Department condemns the recent reports of attacks on the Hindu community in Bangladesh."

The statements from US officials came after the Hindu community on Tuesday staged a demonstration at the Bangladesh Embassy in Washington DC extending support to the victims of the violence. They also proceeded to the White House urging President Joe Biden and the US State Department to take urgent action. Pranesh Halder, representing the Bangladeshi Hindu community, wrote to the US State Department asking it "to ensure that no further harm comes to the beleaguered Hindus of Bangladesh."