US Secretary of State Antony Blinken, on Wednesday, "applauded the Canadian Government," for agreeing to welcome up to 5,000 Afghans evacuated by the USA 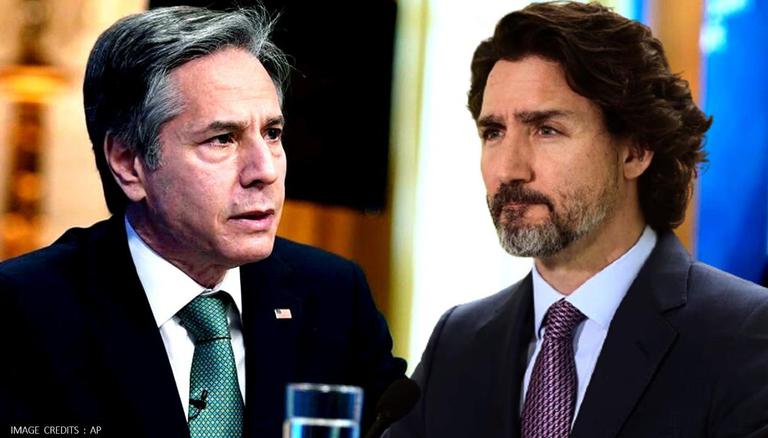 
US Secretary of State Antony Blinken, on Wednesday, "applauded the Canadian Government," for agreeing to welcome up to 5,000 Afghans evacuated by the United States of America.

According to the statement released by the Canadian Government, the country, in its second phase of the evacuation process reached an agreement with the United States to closely cooperate on the safe passage and departure from Afghanistan of their nationals and Afghan nationals. Earlier the Justin Trudeau-led government had welcomed 20,000 Afghan refugees on behalf of the USA and its allies.

In a tweet, Secretary Blinken said that both the US and Canada "share an enduring commitment to the Afghan people."

The U.S. and Canada share an enduring commitment to the Afghan people. We applaud the Canadian Government’s agreement to welcome up to 5,000 vulnerable Afghans whose exit was facilitated by the United States.

The statement from the US came a day after it completed the evacuation process from Afghanistan ending 20 years of service in the war-torn country. Meanwhile, President Joe Biden defended his country's exit from Afghanistan in less than 24 hours after the last US military flight left Kabul.

READ | Biden takes responsibility for decision on US withdrawal from Afghanistan

Biden said it was the “right decision” to terminate the US' 20-year military involvement in Afghanistan. Speaking from the White House on Tuesday, the US President said that putting US soldiers in control of the Afghan capital's airport past the 31 August withdrawal date would have exposed them to increased security risks.

In a series of Tweets, the US President talked about the evacuation process that ended on Tuesday and mentioned that the US will continue to support Afghan people "through diplomacy, international influence, and humanitarian aid."

Let me be clear: We will continue to support the Afghan people through diplomacy, international influence, and humanitarian aid.

We will continue to speak out for basic rights of the Afghan people — especially women and girls — as we do around the world.

Standing by his decision to withdraw all American military personnel from Afghanistan, President Biden said that the "decision was not just about Afghanistan but "ending an era of major military operations to remake other countries."

"We completed one of the biggest airlifts in history — with more than 120,000 people evacuated to safety," President Biden infotmed. He also took full responsibility for the withdrawal decision.

Joe Biden thanks US troops

Thanking the US servicemen for their execution of the dangerous retrograde, President Joe Biden on Monday announced the completion of the massive evacuation operations from Afghanistan. The last American soldier- Major General Chris Donahue boarded a US C-17 aircraft on 30 August, marking the end of the 20-year-long US mission in Kabul. According to the US president, the decision to stick to the 31 August deadline was the unanimous recommendation of the Joint Chiefs and all commanders on the ground.

WE RECOMMEND
US climate envoy John Kerry visits Japan, China for talks on cutting emissions
US says mission to evacuate Americans from Afghanistan will continue after troop exit
Shocking video shows Taliban hanging man from US Black Hawk helicopter over Kandahar
US: Meet super-fit-mom-of-seven who is often mistaken as her daughter's elder sister
US: New Orleans Airport halts operations as Hurricane Ida makes a landfall