US Secy Blinken Says Washington 'would Stand With People Of Hong Kong', Then Deletes Tweet

Blinken deleted a tweet in which he declared that the US would stand with the people of Hong Kong, and accused Beijing of undermining city's political stability 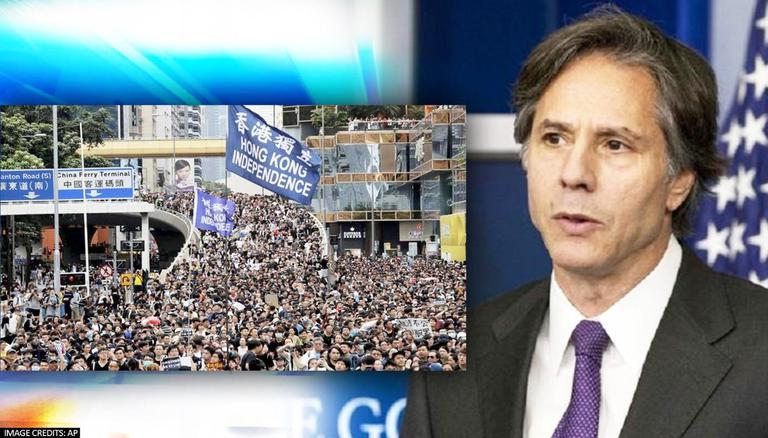 
US Secretary of State Antony Blinken recently deleted a tweet in which he declared that the US would stand with the people of Hong Kong, and accused Beijing of undermining the city’s long-term political stability. Blinken’s now-deleted tweet came after seven Hong Kong opposition councillors were dismissed. In the social media post, the top US official shared his disapproval in a direct manner and said that Beijing should let the voices of all Hong Kongers be heard.

Blinken even added, “The PRC's disqualification of district councillors only weakens Hong Kong's long-term political and social stability. We stand with the people of Hong Kong & continue to support their human rights & fundamental freedoms”.

Joe Biden "America is back"

Meanwhile: Antony Blinken deleted a tweet saying US would ‘stand with people of Hong Kong’ pic.twitter.com/e4CeFbyQeA

However, shortly after, a spokesperson for the Chinese foreign ministry in Hong Kong criticised “irresponsible comments from certain US politicians” about the former British colony. According to The Independent, the Chinese official called out the “hypocrisy and double standard” of the US and said that America itself has an “iron net system” that requires public officers to swear allegiance at home. The official even noted that the US even disqualifies lawmakers for violating parliamentary rules”.

The PRC’s disqualification of seven pro-democracy district councilors undermines the ability of people in Hong Kong to participate in their governance. Governments should serve the people they represent. Decreasing representation goes against the spirit of Hong Kong’s Basic Law.

According to reports, a spokesman for the US State Department later said that the person who manages Blinken’s social media account mistakenly sent it from his account when it was meant to come from a spokesperson. The spokesman said that the “error” was fixed and a tweet from both accounts, speaking out about Hong Kong authorities’ disqualification of pro-democracy district councillors, was posted. He also added that the tweets affirm that the United States stands with the people of Hong Kong. In addition, the spokesperson insisted that the post was not deleted over "political concerns”.