US has summoned China's ambassador Cui Tiankai on March 14 to discuss conspiracy theory of blaming the United States army for starting the coronavirus outbreak.

A day after the Chinese foreign ministry spokesperson tweeted a conspiracy theory and blamed the United States army for starting the coronavirus outbreak, US has summoned China's ambassador Cui Tiankai on March 14 to discuss the same. The US State Department has reportedly said that the senior official in Beijing tweeted a “ridiculous” suggestion that the US started the pandemic which has now spread to over 140 countries. David Stilwell, the Assistant US Secretary of State reportedly gave a “stern representation” to Cui after Zhao Lijian tweeted the conspiracy theory about the source of the fatal virus.

According to an international news agency, a US State Department official has said that China is seeking to deflect criticism for “its role in starting a global pandemic and not telling the world”. Amid the heightened tensions between both China and the US regarding issues ranging from trade and national security, the official also accused China of spreading conspiracy theories which are “dangerous and ridiculous”. The US official wanted the Chinese government to take notice that they “won't tolerate” such statements.

China blames the US

Lijian Zhao had tweeted in both Mandarin and English that gained wide attraction on the Chinese social media on March 12 and a day before it suggested that “patient zero” in the global pandemic may have come from the United States and not the Chinese province of Wuhan which was originally thought to be the epicentre of the deadly coronavirus outbreak as the first cases were reported in late 2019.

"It might be the US army who brought the epidemic to Wuhan. Be transparent! Make public your data! US owe us an explanation," tweeted Zhao.

Read - Miami Theater Says Hamilton Will Continue With No Refunds 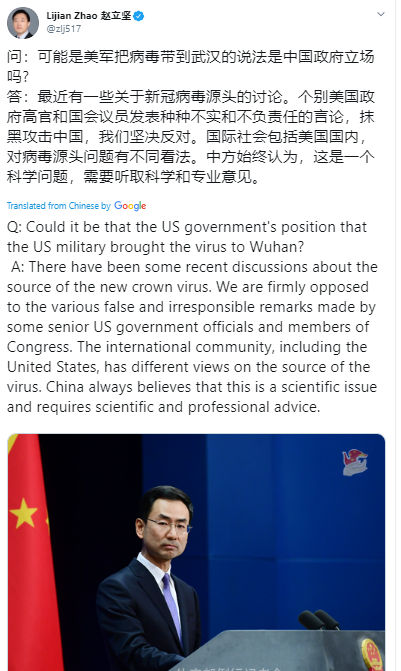 However, scientists widely believe that the pandemic started in a market in Wuhan that sold exotic animals for consumption. First detected in the city of Wuhan, in Hubei Province of China, the virus outbreak has disrupted many lives since December 2019. As per reports, the total number of confirmed cases within China has reportedly hit 80,824 and more than one lakh worldwide. According to reports, the death toll in China has also surpassed 3,100 and the National Health Commission also confirmed more than 11 new cases. The death toll due to the deadly virus across the world also mounted to 5,436.