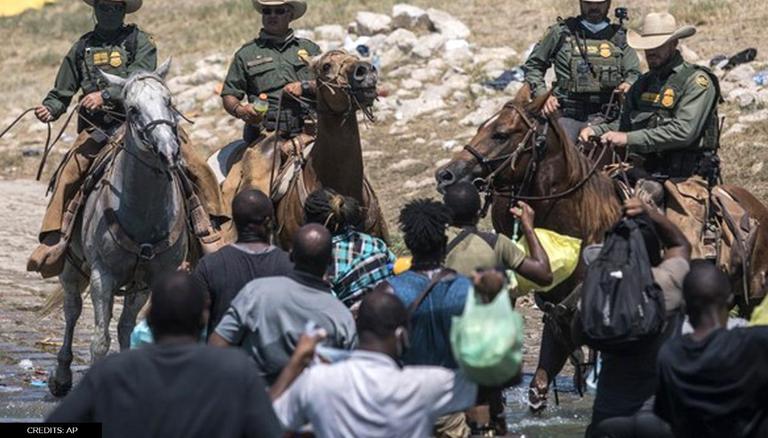 
The USA's Department of Homeland Security (DHS) announced on Thursday, September 23, that horse patrols in Del Rio, Texas, had been temporarily stopped after several images and videos showing border patrol agents deploying forceful methods on Haitian migrants went viral. Since the emergence of the clips, the President Biden-led administration has received widespread condemnation.

Over 14,000 individuals, primarily Haitians, established a tent camp near a bridge in Del Rio, a border town on the Rio Grande. Last weekend, videos released showed the border patrol agents moving their horses quickly and aggressively to forcefully prevent migrants from trying to cross the border. The videos have sparked outrage among Democrats in Capitol Hill, who are now demanding that the Biden government stop using these ways to deport immigrants without giving them the chance to claim refuge in the United States.

Department of Homeland Security Secretary Alejandro Mayorkas was quoted by CNN as describing the act as something that 'horrified' him. The Department of Homeland Security has launched an inquiry. The horse patrols have now been discontinued, White House press secretary Jen Psaki said and told reporters at a press conference on Thursday that DHS officials had informed civil rights leaders that the government would no longer be utilising horses in Del Rio. Psaki further stated that a change in policy has been implemented as a result of the response.

Members of the House Homeland Security Committee from both parties interrogated Homeland Security Secretary Alejandro Mayorkas on Wednesday. Mayorkas said that DHS is tackling border protection while executing both immigration and humanitarian rules. The Secretary of Homeland Security also expressed his worry over the Border Patrol officers' conduct, saying that an undetermined proportion of them had been deployed on admin duty while the DHS Office of Professional Responsibility is conducting investigations.

Meanwhile, DHS officials said that after authorities increased their attempts to remove immigrants in the previous day or two, the number of immigrants at the Texas camp has already been reduced to approximately 4,000. As per Washington Examiner, the Department of Homeland Security revealed that nearly 12 return flights have left the United States, and 1,401 Haitian individuals have been handed back to Haiti.

There was a massive increase of immigrants trying to cross the Rio Grande into Texas in previous weeks which are mostly from Haiti or Mexico on their way to the United States' southern border. On Thursday, the DHS reported that about 5,000 immigrants remained at the Del Rio camp.

WE RECOMMEND
'US not seeking a new Cold War', avers Joe Biden at UNGA amid strained ties with China
'Time to move on’: Biden urges unity on 'global issues' over 'continuing to fight wars'
Boris Johnson in US to attend 76th UNGA session; meets Biden, Morrison amid AUKUS row
Joe Biden meets Morrison amid AUKUS row, says US has ‘no closer ally than Australia’
US lawmakers 'walk out' of Biden administration's briefing on Afghanistan: Report