US Secretary of State, Antony Blinken said: “I welcome news that the remaining 11 US citizens and 1 Canadian kidnapped on October 16 in Haiti are free." 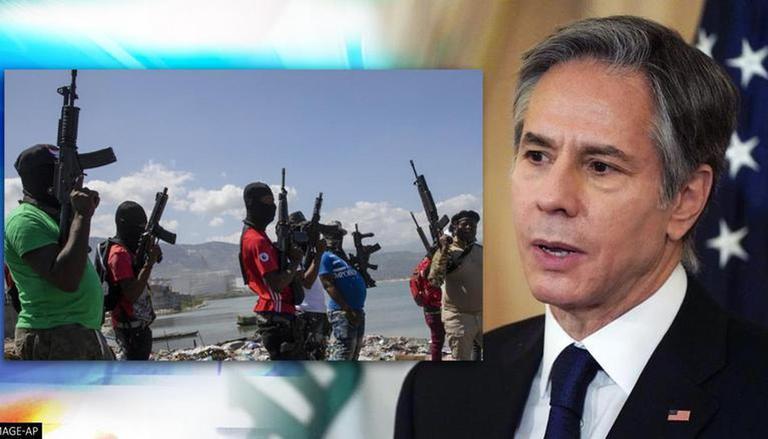 
The United States on Thursday welcomed the news that all of the 17 members of a missionary group, including 11 US citizens and 1 Canadian who were held hostage in Haiti by a gang have been freed. Ohio-based Christian Aid Ministries informed in a release earlier yesterday that the 12 remaining hostages kidnapped by a Haitian gang were released, in addition to the two who were released on Nov. 21 and three others that were freed on Dec. 6. Taking to his official Twitter handle, US Secretary of State, Antony Blinken said: “I welcome the news that the remaining 11 US citizens and 1 Canadian kidnapped on October 16 in Haiti are free, and express our gratitude to our Haitian, US interagency, and international partners.” 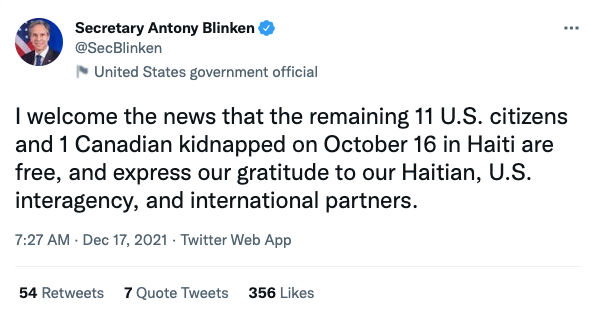 US remains committed to Haiti’s future: US State Dept Spokesperson

At least 16 Americans, one Canadian, and at least five children all in the group aged from 8 months old to 48 were taken hostage by the Haitian 400 Mawozo gang on Oct. 16. Haiti’s Judicial Police had informed Le Nouvelliste newspaper that all the members of the religious organisation Christian Aid Ministries are alive.

Ohio-based Christian Aid Ministries had expressed concerns about the kidnapped group’s safety after the 400 Mawozo gangs released video footage showing their leader threatening to kill those kidnapped if his demands of $1 million ransom per person weren’t met. The Haiti police and the group said Thursday that the remaining members of a missionary group abducted early two months ago have been freed and were now safe. As per the US Department of State, all the members and their families “will soon be reunited.”

In a press release, Ned Price, official spokesperson for the US Department of State said that the Biden administration “remains committed to Haiti’s future and supporting the safety and prosperity of the Haitian people”. He added that the US “will continue to support the Haitian National Police to improve security for all Haitians, as well as US citizens in Haiti.” Spokesman for Haiti's National Police, Gary Desrosiers, had earlier yesterday confirmed to The Associated Press that the remaining hostages were set free, although he did not elaborate on further details. "We glorify God for answered prayer — the remaining 12 hostages are FREE!" Christian Aid Ministries said in a statement. "Join us in praising God that all 17 of our loved ones are now safe."

WE RECOMMEND
US: Antony Blinken warns China to stop 'aggressive actions' in Indo-Pacific region
Japan's Defence Min, FM likely to meet Blinken & Austin in US on January 7: Report
US sanctions Chinese biotech firms for working on 'brain-control weaponry', Uyghurs abuse
In US, man with rare disease has alcohol brewing out of his gut; told to quit drinking
Rupee recovers 10 paise to 76.22 against US dollar in early trade