A woman in the US has claimed that she was fined for talking loudly on her phone while walking on a sidewalk. She has shared the details of the incident. 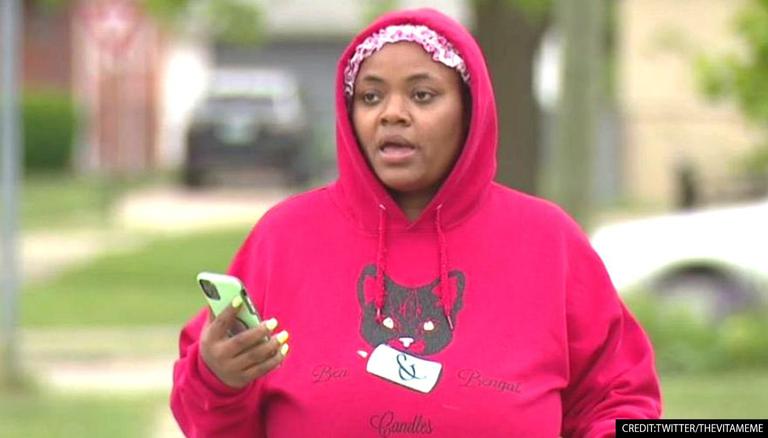 The incident took place on May 26 when a woman in Michigan Diamond Robinson was approached by one of her neighbours who asked her to stop speaking on the phone loudly. The neighbour, a white woman, reportedly asked her, "Do you think that you can get off your phone or talk lower?" In the post, she mentioned that she told her neighbour to stop talking to her walked away. After several minutes, three Eastpointe police officers reached there and soon she started a live session on Facebook to document what had actually happened on the day. She added that the policemen threatened to take her to jail. She ended the post by saying, "I hope I am not the next victim of Black Lives Matter."

In the live video, she said, "I am not doing anything. I am on the phone walking up and down the block that I pay taxes on. I am confused.  One of the responding officers said he was writing her a ticket for "being a public nuisance." She responded that she was not accepting it but the police officer places the ticket in mailbox. "I get a ticket for being a public nuisance because I'm talking too loud on my phone", Robinson said in the video. 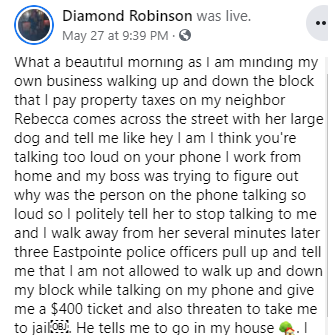 In a statement on May 28, the Eastpointe Police Department said officers arrived at the neighbourhood after receiving a noise complaint. They tried to speak with Robinson about why they were called, but she refused to participate in the investigation. The officers believed that the disorderly behaviour would continue when they left. They then "opted to use the least intrusive resolution for the situation by issuing a civil infraction citation" rather than issuing her a misdemeanour violation or arresting her.