Even as unrest in Cuba continues to exacerbate, President Joe Biden has asserted that his administration will not ease restrictions on remittances sent from US. 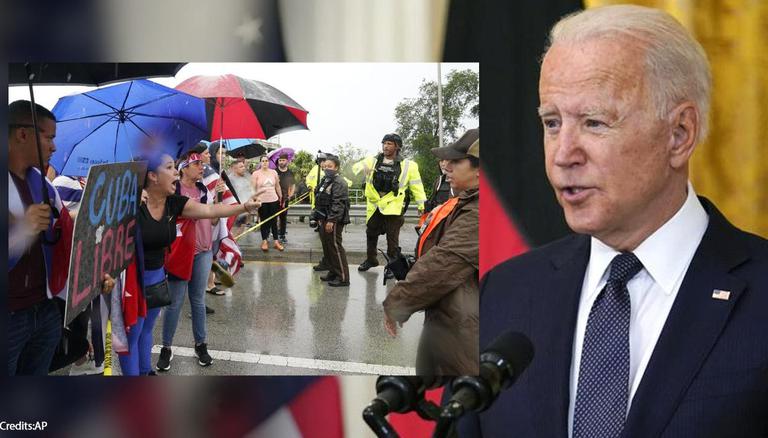 
Even as unrest in Cuba continues to surge, US President Joe Biden has asserted that his administration will not ease restrictions on remittances sent from US residents to relatives in Cuba because the country’s communist government will likely confiscate the money. Since 1959, Cuba has been run on a ‘one state, one party’ principle with ideas inspired by Karl Marx and Vladimir Lenin. Pertaining to the same, Biden reckoned that the US was figuring out how to help Cuban people but in a way that it is not taken advantage of by the island’s administration.

"There are a number of things that we would consider doing to help the people of Cuba but it would require a different circumstance or guarantee that they would not be taken advantage of by the government. For example, the ability to send remittances back to Cuba. I would not do that now because the fact is it is highly likely the regime would confiscate those remittances or big chunks of it,’ The US resident told reporters in White House.

Mass protests broke out in the Caribbean nation over the weekend as people expressed their anger over the dearth of food, medicines, electricity, and COVID vaccines. Calling for freedom, scores of Cuban raised placards and chanted slogans asking President Miguel Diaz-Canel to step down and free elections to be conducted.

READ | EXPLAINER: Causes of the protests in Cuba

Initially,  Cuba’s communist administration blamed the United States for the shortfalls, asserting that  American sanctions caused a loss of more than $5.5 billion in 2020. However, on Thursday Cuban President Miguel Diaz-Canel admitted for the first time that part of the fault for this week's protests in the island nation lies with the government's shortcomings in handling shortages and other issues.

In 2019, the Trump administration imposed restrictions on remittances sent from the United States to Cuba in order to deny the Cuban government access to hard currency. It is imperative to note that American embargoes and sanctions on Cuban trade date back to the 1950s and involve at least a half dozen different US laws. Earlier this week, several reports in US media triggered skepticism of President Biden repealing stringent restrictions on remittances sent from the US to Cuba.

READ | Cuba's leader lays some blame for protests on his government

WE RECOMMEND
Coast Guard monitoring Florida to Cuba crossings
Confronted by Republic; Mehul Choksi panics, asks ‘Where is Cuba? I don’t know anything’
US pledges to continue aide to Afghanistan to build "strong int'l/regional support base"
EXPLAINER: Causes of the protests in Cuba
'Mia Khalifa working with US to fuel protests in Havana': Cuba president Miguel Díaz-Canel