Former US President Donald Trump, who is known for his love for Golf, was recently spotted playing the sport at Doral Golf Resort in Miami, Florida. 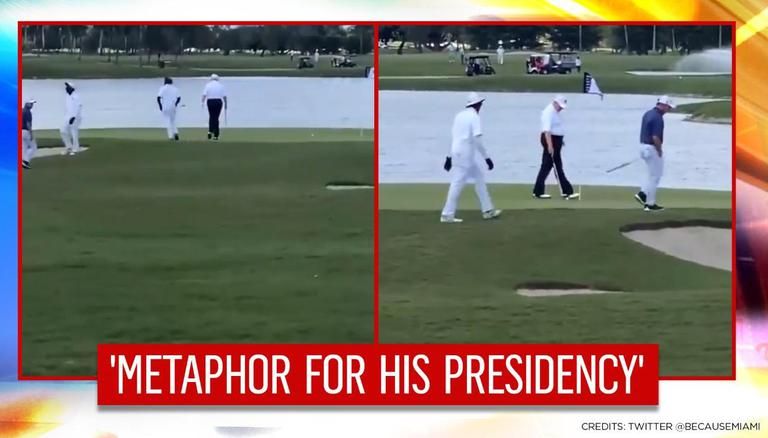 Former US President Donald Trump, who is known for his love for Golf, was recently spotted playing the sport at Doral Golf Resort in Miami, Florida. A 12-second-long video of Trump playing golf went viral on social media platforms. What caught netizens' eyeballs was the Republican leader can be seen cheating on the course. Trump was seen walking with the ball before slowly putting it inside the hole and then taking it out apparently for another round.

The video has been shared on Twitter by a user named 'Because Miami'. The clip has garnered more than 9,18,000 views since it was shared on March 5. Netizens are taking a dig at the former president, calling him a "cheater" for directing the ball into the pit without taking a shot first. "He's been getting away with 'that' behavior his entire life - stiffing contractors, not paying taxes, etc. All are forms of cheating. And worse - sexually assaulting women. And he continues to get away with all of it... maybe," one individual wrote.

Aside from the cheating...my god, that guy is knock-kneed!

Once a cheater, always a cheater. And he has a lousy swing. 🤮😜🤪😝

A metaphor for his life and presidency

Trump's love for golf is well known as he would regularly go out to play the sport even while he was the president of the United States. Most famously, Trump was spotted golfing after losing the election to President Joe Biden in November 2020. The one-time president was seen posing for pictures after a game of golf at Trump National Golf Course in Sterling, Virginia.

Read: 'He Waged An All-out War': Donald Trump Faces Another Lawsuit Over US Capitol Riot

In the first year of his presidency, Trump is estimated to have made 80-90 golfing trips, which is hypocritical because in the run-up to the 2016 presidential election, he slammed the former President Barack Obama for playing the sport while at the office, when there are other important issues to deal with. Trump had promised to stay away from golf if elected to power. Although his promise never saw the light of the day, the Oval office definitely found a room at Trump golf courses as sometimes the president would meet diplomats and politicians at his Mar-a-Lago golf resort.