Former US President Donald Trump’s shuttered hotel and casino in Atlantic City, New Jersey was demolished in the morning of February 17(local time).

Former US President Donald Trump’s shuttered hotel and casino in Atlantic City, New Jersey was demolished in the morning of February 17(local time). Amidst gentle cheers from the crowd, the 39- story building was reduced to rubbles in less than 30 seconds. “I got chills. This is a historic moment. It was exciting,” Atlantic City Mayor Marty Small told AP in the aftermath of the event.

The demolition was originally planned for January 29 with the city authorities organizing a charity event to auction off the chance to blow the building up to the highest bidder, pressing the button from anywhere in the world or on scene. However, the event was eventually nixed.

On Wednesday, at about 9 am, a series of controlled were heard which eventually took down the opulent casino first started in 1984. The Trump Plaza Hotel and Casino, for a brief period, became the most successful of its kind. However, its condition plummeted and by the time it ceased its operations, it was the poorest performing casinos in the city.

“The way we put Trump Plaza and the city of Atlantic City on the map for the whole world was really incredible,” Bernie Dillon, the events manager for the casino from 1984 to 1991 told AP. “Everyone from Hulk Hogan to Mick Jagger and Keith Richards, it was the whole gamut of personalities. One night before a Tyson fight I stopped dead in my tracks and looked about four rows in as the place was filling up, and there were two guys leaning in close and having a private conversation: Jack Nicholson and Warren Beatty,” he added. 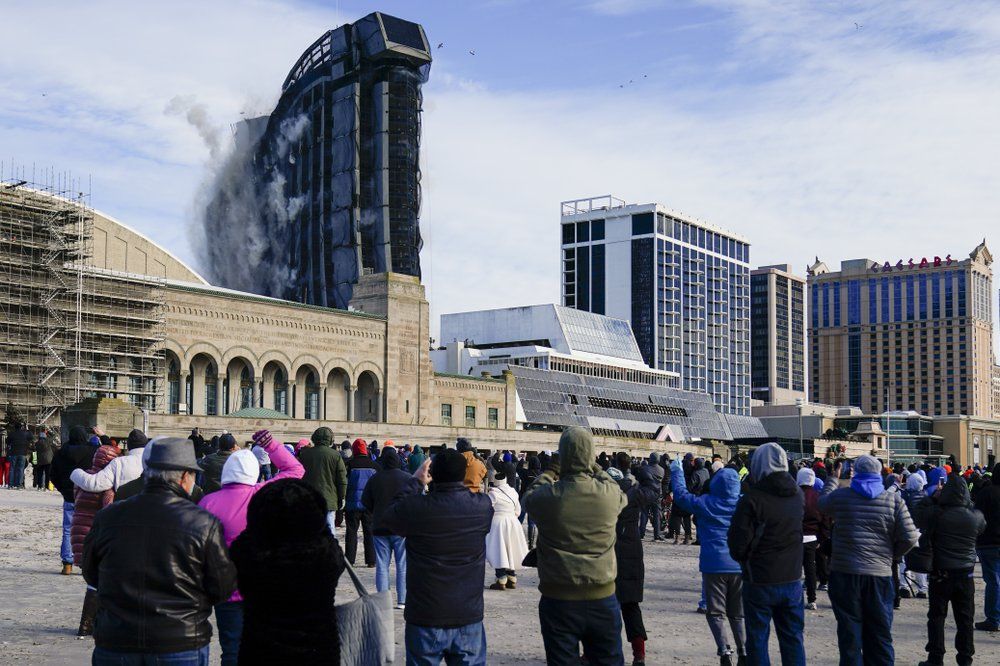 Read: US To Pay $200 Million Membership Fees 'withheld By Trump' In WHO Obligations

Meanwhile, the residents of a South Florida condo complex want former President Donald Trump's name officially removed from their home following the siege at the US Capitol last month. The board of the Trump Plaza condominium voted unanimously last week to change the legal name of the 32-story, twin-tower complex in West Palm Beach, the Palm Beach Post reported. Residents still have to vote on a new name, with submissions due at the end of February.

Read: Trump Preferred Candidate For 2024 Presidential Election As Per Poll, Know Other Favorites

WE RECOMMEND
Trump-McConnell feud threatens Republicans' path to power
Former Trump casino in NJ goes out with a bang
US to pay $200 million membership fees 'withheld by Trump' in WHO obligations
Alec Baldwin revives his Donald Trump impression from 'SNL' to deliver a concession speech
What's next for Donald Trump as after acquittal, his path to Presidency becomes clear