US President Joe Biden, who recently toured the West Coast, arrived in Los Angeles on Wednesday and made a quick stop at a taco restaurant in the Westwood area. 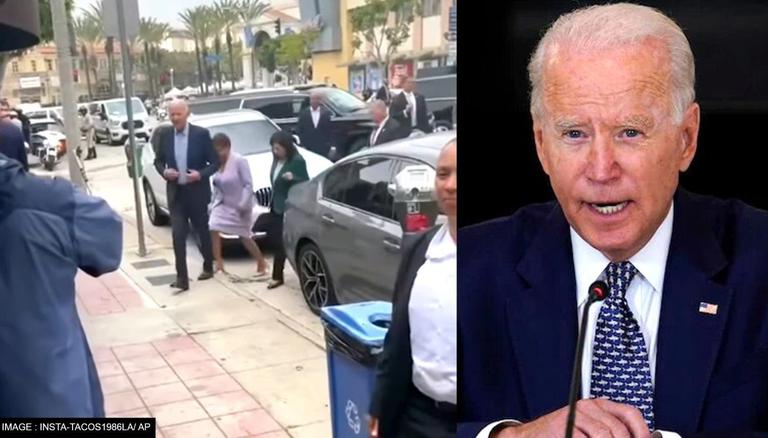 
US President Joe Biden, who recently toured the West Coast, arrived in Los Angeles on Wednesday and made a quick stop at a restaurant. However, what caught everyone by surprise was the POTUS' decision to pay four times more for affordable tacos and chicken quesadillas.

Biden, along with Rep. Karen Bass, arrived with his motorcade at Tacos 1986, a popular food chain in LA situated in the Westwood area, NBC Los Angeles reported. "Takeout order for Bass," Biden said at the takeout counter, according to a video uploaded by him on Twitter. "What do we owe you?" Biden asked, to which the cashier responded that he is eligible for a "public service" discount. Nonetheless, the President went on to give $60, requesting the cashier to use the extra money for the next customer's order.

If you got the next quesadilla, let me know. pic.twitter.com/gLJGs98jME

A video uploaded by Tacos 1986 on Instagram displays the 79-year-old in a formal blue ensemble as he enters through the restaurant’s front door. The clip, captioned as “POTUS X TACOS 1986”, has garnered over 65,000 views and more than 400 comments so far. “No matter what party anyone may be, its an honor for any company to have a President of our country stop in! Congratulations! Wishing you greater success!” one user wrote.

As Biden headed out in his vehicle, a journalist approached him to ask him about the gasoline prices of LA, the city that has recently witnessed its most significant dip in prices since February 2020. "Well, that's always been the case here," Biden said, adding that "Nationwide, they came down by $1.35, and we're still down over a dollar.”

Biden touched down in Los Angeles on Wednesday, merely weeks before the nationwide midterm elections of November. Prior to visiting Southern California, the President travelled to Colorado to designate Camp Hale as his administration’s first national monument.