'We Are Honoured': 9 Of 11 Spelling Bee Finalists In US Are Indian-American Kids

Nine Indian American kids proficiently advanced through all virtual rounds, while only two American kids made it to the US Spelling Bee annual contest. 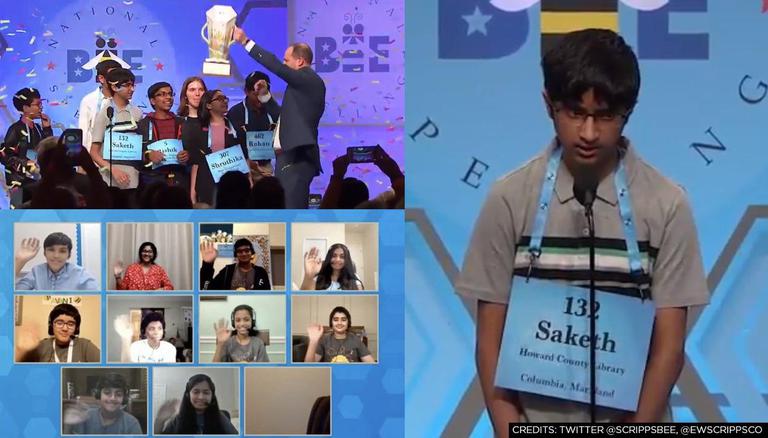 He is one of the 9 Indian American kids in the United States who have qualified among 11 finalists for the annual spelling bee contest administered on a not-for-profit basis by Cincinnati-based company The E.W. Scripps to gauge the students’ spelling and vocabularies.

In 2016, the Scripps National Spelling Bee was won by Indian American kids, Nihar Janga, aged 11, from Texas, and Jairam Hathwar, aged 13, from New York. In 2017, the national spelling bee finals were bagged by Akshara Paimagam of Randolph Middle School of Indian origin. Meanwhile, the 2015 annual spelling bee contest was won by Gokul Venkatachalam and Vanya Shivashankar, both Indian American students, while Vanya’s older sister Kavya has won the Scripps National Spelling Bee in 2009.

The other Indian kids to win the popular contest are Ansun Sujoe and Sriram Hathwar in the year 2014, Arvind Mahankali in 2013, Snigdha Nandipati in 2012, Sukanya Roy in 2011 and Anamika Veeramani in 2010. The Indian American Children have been qualifying for the US national spelling bee contest leaving their American friends behind with chances of more than 80 percent of them even winning, for the past several years. Interestingly, these Indian origin children comprise less than 1% of the total American school's population.

11 Finalists will battle the dictionary, but only one will be named the 2021 Champion!🏆

"We are honored to introduce our 2021 Scripps National Spelling Bee Finalists. Round after round, this group of spellers proved their mettle, and we look forward to seeing them show off their knowledge and hard work as they square off against the dictionary on the national stage," said Dr. J. Michael Durnil, executive director of the Bee.

"Congratulations to all of this year's 209 national qualifiers – they've persevered over a year that has been challenging in many ways, and our team is proud to have witnessed their journey.”

On Tuesday, 9 Indian American kids proficiently advanced through all the virtual rounds of the national spellers contest, while 2 American kids made it on the finalist's list to compete for the champion title for the 2021 Scripps National Spelling Bee Finals next month. While most of the semi-final rounds were held remotely due to the coronavirus pandemic, the final competition for this year's Bee will be hosted in person at ESPN Wide World of Sports Complex at Walt Disney World Resort near Orlando, Florida, US.

That concludes the Semifinals! Congrats to the 11 spellers continuing onto Finals to compete for the Scripps Cup at @ESPN’s Wide World of Sports Complex. Watch live on ESPN2 and ESPNU on Thursday, July 8, at 8 p.m. ET. #SpellingBee #TheBeeIsBack

The show will also be broadcast LIVE prime time on ESPN2 at 8 pm ET. Those with no cable subscription can watch it on FuboTV, or Hulu streaming service, and Sling. One could also tune into the updates on the spellers’ official Instagram, or Twitter handle.

The Indian American children made it to the 2021 Finalists after advancing the tough three levels of competition hosted virtually: The Preliminaries on June 12, the Quarterfinals on June 15, and the Semifinals on June 27. The national finalists, aged 9 to 15, come from at least 50 US states and the District of Columbia, Guam, Puerto Rico, the US Virgin Islands, and Department of Defense Schools in Europe, according to US broadcasters. As many as 209 spellers competed on a national level, of those the 9 Indian American children qualified for semifinals held on June 27 Sunday from 7 to 11 pm on ESPN America for the championship trophy.

Here's the names of the 11 finalists for this year's US Spelling Bee contest: