Psaki's remark come after Biden on Wednesday told reporters outside the White House that he would announce a joint meeting between four NATO allies and Russia. 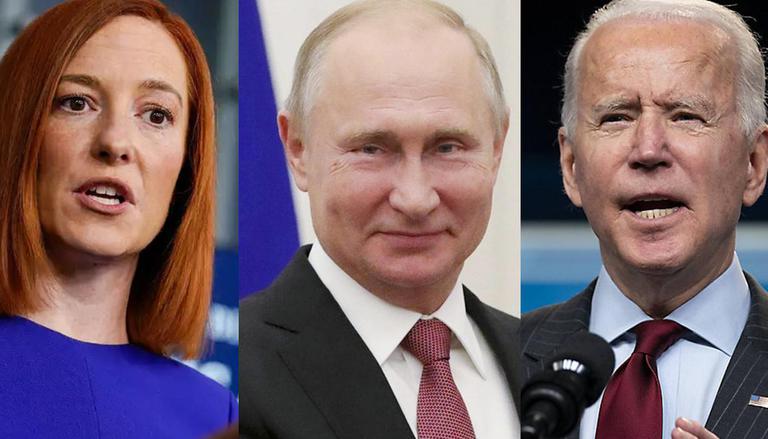 
White House Press Secretary Jen Psaki during a regular press briefing on Friday could not explain what US President Joe Biden was talking about when he announced a new meeting between officials of the North Atlantic Treaty Organisation (NATO), US and Russia. Answering a question on Russia's demands laid out during the "secure" meeting between Biden and his Russian counterpart Vladimir Putin, Psaki explained that Moscow has been advocating for and voicing the same demands for several months. When pressed about the said meeting, Psaki briefly mentioned that she doesn't have any idea about the "point in the format."

"While I don’t have an update on what format that may take, which I think is the second part of your question, it’s important to note that there have been formats for conversations about European security with Russia for 70 years, approximately.  And many of those are formats that could work and we are open to being the format, moving forward," Psaki clarified, while speaking to the reporters, a White House release said on Friday.

“In terms of any other format or forum, there is no current mechanism for that,” she added.

Psaki's remark came after President Biden on Wednesday told reporters outside the White House that he would announce a joint meeting between four NATO allies and Russia by Friday. During the meeting, the participants will be expected to "discuss the future of Russia's concerns relative to NATO writ" and "bring down the temperature" at Ukraine's Donbas conflict zone, Sputnik reported. It is pertinent to mention that Biden was referring to the tensions that have escalated after US intelligence officials determined the deployment of over 90,000 Russian troops along the Donbas region, which has sparked speculations over the potential invasion of Kyiv in the coming weeks. However, Biden did not elaborate on his plans since he tentatively announced the meeting.

On the other hand, Psaki comprehensively explained the US' response to the Kremlin's demands for NATO, which required the international military alliance to refrain from deploying troops and strike weapons along neighbouring countries of Russia. "Well, this list — which we have certainly seen but should not come as a surprise — it’s the same list of demands that the Russians have been advocating for and voicing for several months, if not years.  And that is their prerogative to have — to have their views and demands.  We have our own, and we have our own concerns about security circumstances around the world, including, of course, on the border of Russia and Ukraine," she said. Emphasising the point of dialogues and discussions, she also added that Russians, Europeans and US can all raise their respective concerns.

Russian Deputy Foreign Minister, Sergei Ryabkov, too reiterated Psaki's sentiments saying that he does not know what Biden was referring to. “I know nothing about any such meeting. I did see comments by the US President on this score. I proceed from the assumption that the formats for further talks on the ‘red lines’ our leadership has been talking about for the past few days, and also reliable, legally binding security guarantees for Russia, are subject to further discussion,” Ryabkov said, as quoted by Sputnik. His comments came after Putin and Biden, on Tuesday, engaged in "businesslike" discussions over potential armed conflict at the eastern Ukraine borders.