'You Know Why': Joe Biden's Awkward Response About Not Attending Pope Benedict's Funeral

Joe Biden, on Wednesday, encountered a reporter who was pressed to find out why the US President was sitting out the funeral of deceased Emeritus Pope Benedict. 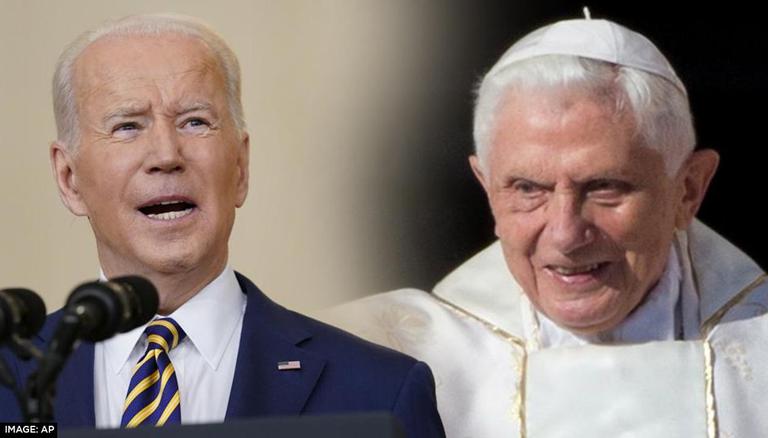 
Joe Biden, on Wednesday, encountered a reporter who was pressed to find out why the US President was sitting out the funeral of deceased Emeritus Pope Benedict XVI in Saint Peter's Square, Vatican City. In a combative exchange that was captured on television, a reporter from the Catholic television network ETWN asked Biden, "You're not attending [Pope Benedict XVI's] funeral tomorrow, though. Why?"

Responding to this, Biden said, "Well why do you think?, to which the reporter said: "You tell me." After saying "You know why” and receiving a "You can tell me, sir” in return, Biden went on to explain the reason behind his non-attendance, stating that visiting the funeral would require excessive security and personnel which could disrupt the memorial service.

Biden reveals why he won't attend the late pope's funeral

"The reason I'm not attending the funeral tomorrow is it would take an entourage of a thousand people to show up. We would move everything in the wrong direction,” the US president said, adding that his retinue “would just get in the way”. Calling the late Pope a “fine man”, Biden said in a statement released on Saturday that he would “always remember” Benedict’s “generosity and welcome.” He also recalled the “meaningful conversation” he had with the late pontiff back in 2011, the Independent reported.

The official US delegation at the late pope’s funeral would be led by former Indiana senator  Joe Donnelly, who currently serves as US Ambassador to the Holy See. “The U.S. ambassador to the Holy See, Joe Donnelly, will represent the United States at the funeral of the pope in line with the wishes of the late pope and the Vatican. This is what their requests were,” White House Press Secretary Karine Jean-Pierre said on Tuesday.

Pope Benedict XVI passed away on December 31, 2022, at the age of 95. He was the head of the Vatican Church from  April 2005 to February 2013, when he handed in his resignation due to health-related problems, thus becoming the first Pope to step down since the year 1415.