Anand Mahindra recently shared a video of Mahindra Thar wading across a water body and back with ease on his official Twitter handle. Watch video. 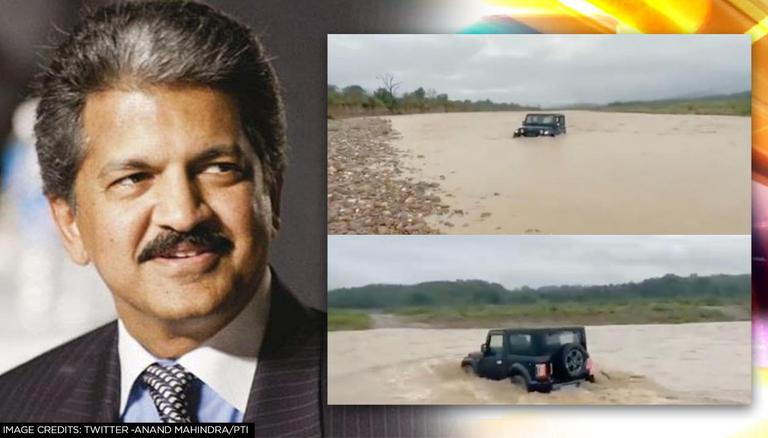 
Mahindra & Mahindra (M&M) Chairman, Anand Mahindra is not letting Bolero steal the show, as he tweeted the video of a Thar wading across a water body and back with ease. Previously on Tuesday, September 14, billionaire Anand Mahindra had expressed his awe when he retweeted a Bolero making it through bonnet high water across the flooded streets of Rajkot, Gujarat.

While sharing a video on Thursday, September 16, the Mahindra CEO said that the company may have to create Mahindra Amphibious Vehicles’ (MAV’s) after his vehicles portrayed such magnificent skills.

Mahindra Thar is a powerhouse for M&M and is among the best selling car for the company. The robust built, eye-catching looks and a typical yet contemporary jeep feel is what makes this car such a favourite among enthusiasts. And yet again the Thar has proved why it stands out from the rest of the SUV's out there in today's market. In a video that Anand Mahindra shared on his Twitter page, it shows a Thar crossing the entire width of a water body and back. The Thar in the video can be seen half-submerged in water. While the fast river currents do sway the car's trajectory yet, the Thar makes its way to and fro the water body with very little effort to say for the least. Take a look at the video shared by the M&M Chairman below.

After I RT’d the tweet about a Bolero in Gujarat wading through flood waters, several of you shared this video that’s circulating on @YouTube I think we may well have to create a new vertical called ‘Mahindra Amphibious Vehicles’ (MAV’s!😊) pic.twitter.com/UPRLMfVZCk

On Tuesday, September 14, Twitterati had shared a video of an SUV Bolero wading through water as high as the bonnet in the flooded streets of Rajkot in Gujarat. In the 30-second short video, a Bolero deputed under the Rajkot Police can be seen wading. In the uploaded clip that has been heavily circulated on social media, no other cars are seen on the road other than the Bolero. The video had amazed the chairman of the Mahindra Group. He took to the microblogging site and wrote, "Seriously? During the recent rains? Even I am pretty amazed." It is worth noting that the company had first introduced Bolero in 2000 after which it became one of the favourites among Indian buyers, especially in North India. It has been a consistent performer for Mahindra over the years and has been its best-selling model for quite some time. Meanwhile, the video which was reshared by Anand Mahindra is now viral on social media platforms including, Twitter.

Seriously? During the recent rains? Even I am pretty amazed. https://t.co/Co5nve9uwd