The Union Cabinet approved the Programme for Development of Semiconductors and Display Manufacturing Ecosystem in India on Wednesday. 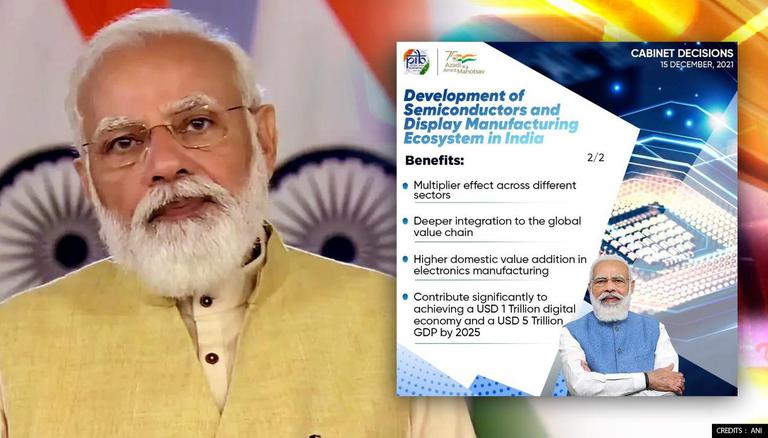 
As the Union Cabinet approved the Programme for Development of Semiconductors and Display Manufacturing Ecosystem in India on Wednesday, Prime Minister Narendra Modi said that the Programme will strengthen the dream of an 'Aatmanirbhar Bharat.'

Today’s Cabinet decision on semi-conductors will encourage research and innovation in the sector. It will also boost manufacturing and thus strengthen the dream of an Aatmanirbhar Bharat. https://t.co/HcuY318EZ1

As per the Centre's official statement, the following broad incentives have been approved for the development of semiconductors and display manufacturing ecosystem in India:

Welcome the important decisions taken by the Cabinet today:

- Mutual Legal Assistance Treaty in criminal matters between India and Poland.
Will enhance effectiveness of both countries in investigating and prosecution of crimes.

Earlier, Union Ministers Anurag Thakur and Ashwini Vaishnaw held a cabinet briefing to explain the details and importance of the programme and the way it will help the country develop. During the Cabinet briefing, Union Minister of Information and Broadcasting Anurag Thakur informed that an ambitious project to establish a complete ecosystem of semiconductors and display manufacturing has been sanctioned and Rs 76,000 crores will be spent on this project in 6 years.

Further elaborating on the scheme, Union Minister of Telecom and Information Technology (IT) Ashwini Vaishnaw said, "Prime Minister Narendra Modi has taken a historic decision in the field of Electronics in which the development of a complete ecosystem could take place within the country including design, fabrication, testing and packaging. It would take the investment of Rs 76,000 crore. Today we have reached USD75 billion in electronics manufacturing in 7 years. With the pace that we are moving at, in the next 6 years, we will reach USD300 billion in electronics manufacturing."