Zomato on Tuesday came out with a clarification to address the concern of the people who have slammed the food deliverygaint for their latest advertisements. 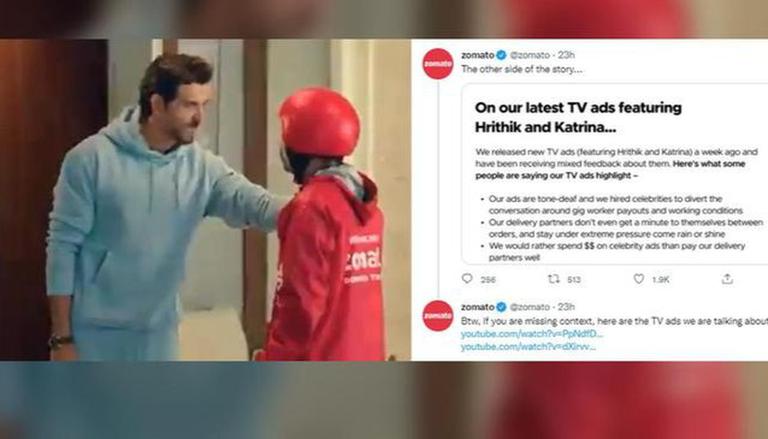 
After facing severe backlash on its latest set of advertisements, Zomato on Tuesday came out with a clarification to address the concern of the people who have slammed the food delivery giant for being tone-deaf in their latest advertisement about issues of delivery workers. They have also received reactions accusing them of not paying sufficient wages to the gig workers and abusing them.

Zomato has put out a statement to clear the air concerning their new TV advertisements starring Hrithik Roshan and Katrina Kaif, the company believes that some people have perceived the advertisements in a different context, however, they have been purely made with the right intentions to display delivery workers & their customers as their heroes. The statement that was posted on Zomato’s Twitter handle reads, “We released new TV ads (featuring Hrithik and Katrina) a week ago and have been receiving mixed feedback about them.”

The other side of the story... pic.twitter.com/hNRj6TpK1X

The food delivering giant elucidates that through the advertisements, they didn’t want to hurt anyone’s emotions or portray anything ill-intentioned, contrasting to what is being perceived, they wanted to ‘make delivery partners the hero of the ad.’ Through the adverts, they wanted to highlight that “we should talk respectfully to delivery partners (like Hrithik Roshan and Katrina do in the ad, and very few other people do). Raise the level of dignity associated with a delivery partner's job and demonstrate the pride which most of our delivery partners serve our customers with. Last but not least, we reiterate that every customer is a star for us and no less than Hrithik or Katrina. We believe that our ads are well-intentioned, but were, unfortunately, misunderstood by some.”

READ | Zomato to launch Limited Edition 'Pro Plus' membership today: All you need to know

Apart from this, the company further pointed out the discussion, that has been going around adverts ever since their release, and what are the things they are being condemned for. They wrote, that some people believed that the company is tone-deaf to the online chatter that has been going around on gig workers being underpaid, and they said that they are being called out for hiring celebrities to divert the conversation around gig worker payouts and working conditions.

READ | How to buy Zomato 'Pro Plus' membership? Will it be available in all Indian cities?

The company further said that they were also called out for not paying their delivery partners in satisfying amounts, they were accused that delivery agents don't even get time for themselves between orders, and they stay under extreme pressure come rain or storm, without being compensated for. The company further wrote that some people condemned them for spending large amounts on ads.

The stark conversation around the payload of the gig workers has been going on social media for a long time, with netizens demanding justice or improved facilities for the delivery guys. People have roped in all major food giants on the same, including Swiggy and Uber eats as well.