Delhi Election results LIVE: With 672 candidates in the fray, the Delhi Assembly Elections saw a fierce election campaign of the ruling AAP and BJP while Congress remained almost absent.

Delhi Election results LIVE: With 672 candidates in the fray, the Delhi Assembly Elections saw a fierce election campaign of the ruling AAP and BJP while Congress remained almost absent.

My best wishes & congratulations to Mr Kejriwal and the AAP on winning the Delhi Assembly elections.

Congratulations to @ArvindKejriwal ji and @AamAadmiParty on the hattrick win in #DelhiPolls2020. Best wishes for a successful tenure.

Andhra Pradesh Jagan Mohan Reddy and Bihar Chief Minister Nitish Kumar wished Delhi CM Arvind Kejriwal on winning 63 seats of the 70-seat Delhi Assembly. Kumar is up for re-election in the second half of 2020.

Hearty congratulations to @AamAadmiParty & @ArvindKejriwal on the remarkable victory in #DelhiPolls2020. Wishing you a successful tenure ahead. #DelhiResults

Meanwhile, when asked by reporters on Kejriwal's victory , he called him 'Janata maalik hai (public is boss)". 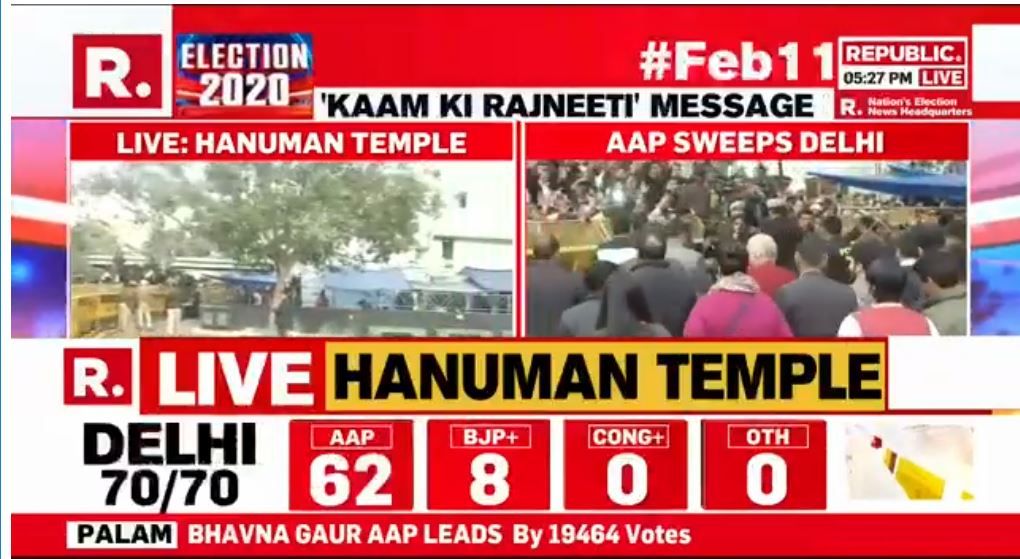 "It's the biggest gift I've received (she celebrates her birthday today). This is the victory of truth. I think politics should be done on basis of issues. Political parties should learn that such comments shouldn't be made".

BJP Delhi chief Manoj Tiwari after conceding defeat, said,"I wish thank all Delhi voters. BJP workers who have done a lot of work, I wish to thank the. I wish to congratulate Arvind Kejriwal and hope will live up to Delhi's expectations. We had expected a lot, but they have not come true. We will introspect into it," while addressing a press conference.

Talking about BJP's increased vote share, he said,"As per latest trends, BJP is leading or has won 7 seats. At times in the face of defeat, we will get disappointed and it is tough time. If Delhi has voted accordingly, it must be for a particular reason. In 2015, 32% vote share was for BJP but we have increased to 37 % vote share".

With a jibe at Congress, he added,"A new trend has started - two-party politcs. Congress has already disapperared. We will work accordingly. We have never done hate politics and wish that politics be done only on work only." RJD leader Tejashwi Yadav on #DelhiResults: I congratulate Arvind Kejriwal. The mandate given by the people of Delhi has shown that they will vote on work and development. pic.twitter.com/fj2kUCgvNA