In a massive development within the Congress party, Rahul Gandhi has sacked his Mumbai Congress chief Sanjay Nirupam and appointed Milind Deora in his place.

In a massive development within the Congress party, Rahul Gandhi has sacked his Mumbai Congress chief Sanjay Nirupam and appointed Milind Deora in his place.

The press release by the Mumbai Congress states: 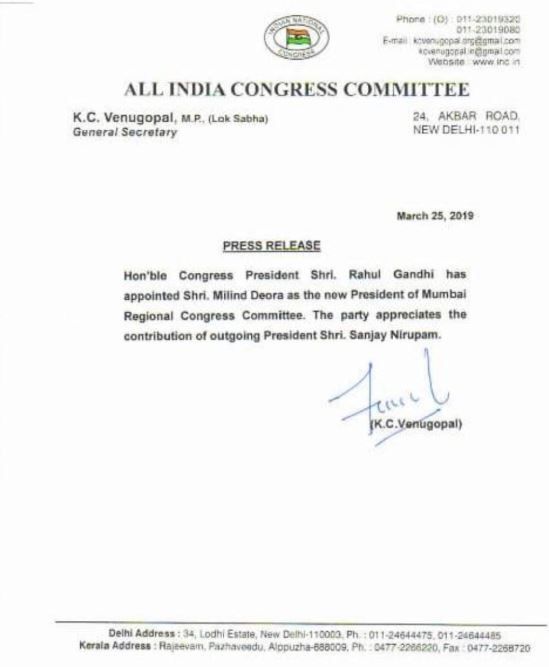 Meanwhile, Nirupam has been given a Lok Sabha election ticket in lieu of his ouster from the position:

Congress party releases a list of 26 candidates in Maharashtra and West Bengal for #LokSabhaElections2019 . Sanjay Nirupam to contest from Mumbai North-West (Maharashtra). pic.twitter.com/Ddlo22ibuS

The change at the top of the Mumbai Congress comes on the back of months of infighting between the two leaders and their respective camps.

Speaking to Republic TV in February, Milind Deora had cited 'difference of opinion' within the party with regards to the spat, though he hadn't named Nirupam directly.

Milind Deora had said, "Firstly there is no factionalism or crisis, there are differences of opinions that exist in every party in every part of the country its not unique to Congress party or Mumbai. There are senior party leaders in Mumbai who are upset, who want to contribute to the party, who believe that Rahul Gandhi is doing a commendable job, trying to up the ante against the government. He is touring the length and the breadth of the country, mobilising people, mobilising the party. We believe that there is strong anti-incumbency against the government both in Mumbai and other parts of the country. It is important for all of us in the Congress party to work together as a team and unitedly and ensure that we defeat the Shiv Sena-BJP in Maharashtra."

EXCLUSIVE: Internal Difference Of Ideology And Opinion Within Congress Must Be Addressed, Says Milind Deora Amid Pre-election Tussle With Sanjay Nirupam

Before that, in September 2018, a meeting had been held between senior Mumbai Congress leaders and party president Rahul Gandhi at the latter's residence in Delhi where the leaders had complained about Nirupam.

As per sources, Naseem Khan explained the current situation of Mumbai Congress to the leaders by saying, 'We are not against Sanjay Nirupam. He is hard working, but the problem with Nirupam is that he is not the face on which we can win the maximum number of seats in the upcoming Lok Sabha and assembly polls in Mumbai.'

42-year-old Milind Deora has twice been a Member of the Lok Sabha from the Mumbai South constituency, and had served as the Minister of State for Communications and IT and Shipping under the UPA-2.

Sanjay Nirupam, meanwhile, had been a Rajya Sabha member from Maharashtra from 1996 to 2006 and was elected to the Lok Sabha from the Mumbai North seat in 2009.