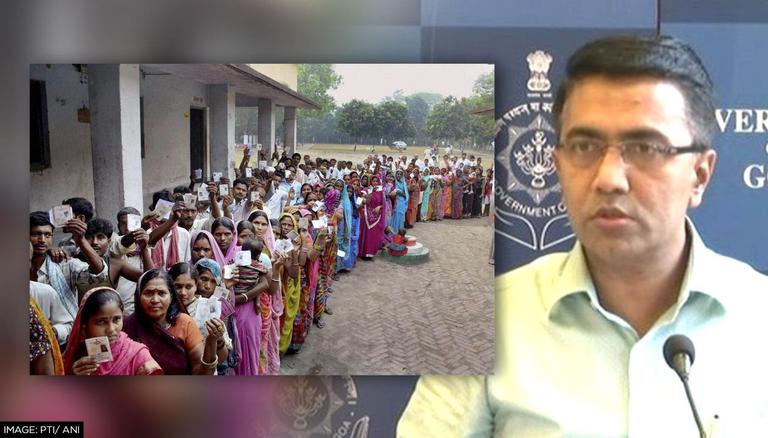 
As the Election Commission of India (ECI) announced the schedule for the upcoming Goa Assembly elections, the state Chief Minister Pramod Sawant has welcomed the election schedule, expressing full confidence over winning the upcoming polls. He also welcomed the COVID-19 guidelines announced by the ECI.

CM Sawant said, "I welcome ECI announcement. The way ECI has declared dates considering COVID spread I thank him on behalf of Goans. BJP will win with the complete majority in Goa. BJP is always in election mode."

He added, "Our cadres are always ready for polls. We are fully prepared for polls, we will contest on all the constituencies and win with majority numbers. I welcome EC guidelines on COVID. We  are giving more stress on small meets and door to door campaigns."

Meanwhile, Union Minister and BJP leader G Kishan Reddy also reacted to ECI's announcement, stating that the 'double engine government' will be back to power in Goa with the full majority after the assembly polls.

ANI quoted Reddy saying, "Goa has got a stable government in the last 10 years and is on the path of development. I want to appeal to the public to have faith in us. The double engine government will be back to power in Goa with the full majority."

Goa elections will be conducted in only one phase, which will fall on February 14. Counting of votes will be held on March 10.
The poll dates were announced by Chief Election Commissioner Sushil Chandra at a press conference on Saturday.  Notably, while the BJP is the ruling party in Goa, in opposition are Goa Forward Party, Maharashtrawadi Gomantak Party, Congress and debutant Aam Aadmi Party (AAP) as well as the Trinamool Congress.

Chief Election Commissioner of India Sushil Chandra also announced the following COVID-19 protocols that are to be followed in the polls: