Alia Bhatt in an Instagram story gave fans and netizens a glimpse of her sister Shaheen's much-anticipated book 'I've never been unhappier'. Take a look below-

Alia Bhatt who currently has an array of B-town projects seems to have taken some time off to relax at home as she gave us a glimpse of her reading her sister Shaheen's much-anticipated book 'I've never been unhappier'. Calling it with the best book ever, Alia posted a boomerang where the author of the book was seen hiding her face and playing peek-a-boo. Her caption read, "Holding the best book ever with the author trying desperately to stay out of the view, but curiosity doesn't hold this little cat-back'. For the uninitiated, Alia's elder sister Shaheen was diagnosed with depression at the age of 18, and in a book, she speaks about how depression was not the outcome of her lifestyle and sheds light on the mental illness. Take a look at Alia Bhatt's Instagram story below- 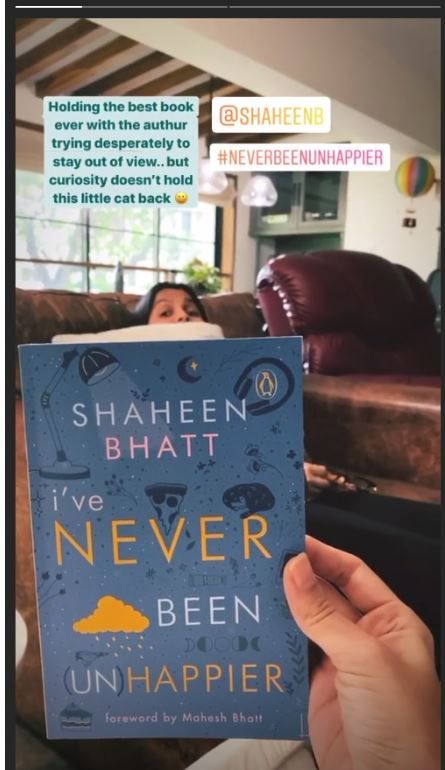 The actress recently made headlines during the bash thrown by Bollywood for pop-star Katy Perry. Bhatt was heavily praised by fans and netizens over her sartorial fashion choice. In a series of pictures that have surfaced on the internet, she can be seen wearing a checkered dress, with flared sleeves. The bash was thrown by ace-filmmaker Karan Johar and was attended by who's who of tinsel town. Apart from Bhatt, Anushka Sharma, Natasha Poonawallah, Arjun Kapoor and others were spotted having a swell time and chatting up with the pop sensation. Take a look below-

READ: Alia Bhatt Cuddling With Her Kitty Is All About Winter Bliss; See Pic

Alia Bhatt is in between projects right now. While she is shooting for her father Mahesh Bhatt's book Sadak 2, she will also be seen in Brahmastra alongside Ranbir Kapoor. The film stars Amitabh Bachchan, Dimple Kapadia and Mouni Roy in pivotal roles. She will also be seen in Sanjay Leela Bhansali's Gangubai Kathiywadi & Karan Johar's big-budgeted Takht.