"T 3553 - Just 43 days left for the Year 'two thousand nineteen' to end...," Amitabh Bachchan wrote on his Twitter handle on Monday. Netizens agree with him.

We are soon going to witness the end of a decade. In other words, we will soon be leaving the 2010s and entering the 2020s. And megastar Amitabh Bachchan is thinking about it and also has another twist to it. He wrote on his Twitter handle that in 43 days, 2019 will end and we will no longer call a year 'teen' for a long time.

Netizens agreed with Bachchan and wrote: "This year was a fruitful, exciting and entertaining one. We had elections, World Cup and KBC. Sir rightly said, next year we won't be saying 'teen'.", while the other said: "Irrespective of what people think or may say.. I’ll call it Twenty-Twenteen!!". A fan wrote: "Very True.. Teenage of this century is now at its terminal.. Just 43 Days.. This journey was very beautiful."

On Aaradhya's birthday, Bachchan penned a blog saying that Britishers have left us with the tradition of a cake. The actor gave his version to the theory of blowing candles and cutting a cake. He also got a star painted on the face at a stall. Take a look -

The child grows up .. and celebrations keep in growth too .. for long have the traditions of the British been kept in place .. that of the cake .. I presume that a cake was a rarity during the time of the inception of this tradition .. so it became a rarity and hence to be brought about on special occasions .. the candle and the number of them for age and its blowing has remained for too long ..

what be the tradition or history of it ..

.. in my and our tradition in this part of the world the blowing of candles is an indication of an end .. here the blowing is an achievement of celebration .. so do we continue or change or what .. we in our family did .. the cake was replaced by a ‘khoye’ ki barfi’ and no candles ..

Amitabh Bachchan shoots for more than 12 hours amid sabbatical reports 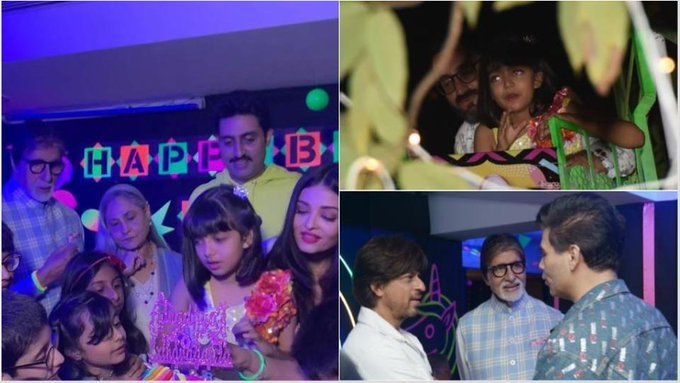