Kapoor is a surname that is often synonymous with the film industry. Prithviraj Kapoor and Raj Kapoor were the pioneers of Hindi cinema, while their children and grandchildren carried their legacy forward. Till Taimur Ali Khan, many names attained stardom while some could not live up to the expectations. A smaller Kapoor family, but related to the ‘original’ Kapoor family, too shot to fame later on. Prithviraj Kapoor’s distant cousin Surinder Kapoor and his sons, Boney, Anil and Sanjay too ventured into the film industry. And today, both the families’ children are among the leading stars of Bollywood. But almost six decades ago, it was not films that used to be their passion, but a soft drink. Rishi Kapoor sent fans of the Kapoors into nostalgia with a snap of his with Anil and Boney Kapoor, with the duo sipping on Coca-Cola.

Rishi Kapoor on Wednesday shared a cute throwback pic featuring kids, many of whom went on to actors and producers, some even tasting big success. The snap featured Boney Kapoor, Aditya Kapoor (son of Shashi Kapoor), Rishi Kapoor, Tutu Sharma (producer and husband of actor Padmini Kolhapure) and Anil Kapoor.  Almost all of them would’ve been unrecognisable if not for the caption given by the Bobby actor. In the sepia-like black and white photo that seemed to be from a birthday party, some of the kids have worn party hats. Rishi Kapoor seemed to be the centre of attention as it seems he is trying to hold Boney Kapoor. However, he has also held tightly a soft drink bottle. At the same time, Anil Kapoor is seen quietly sipping the drink, much away from the chaos and rightly earned the term ‘cute brat’ from Rishi Kapoor. Rishi Kapoor captioned the snap, “Original “Coca Cola” advertisement. Boney Kapoor,Aditya Kapoor, Rishi Kapoor,Tutu Sharma and that cute brat Anil Kapoor( photo courtesy Khalid Mohammed).” 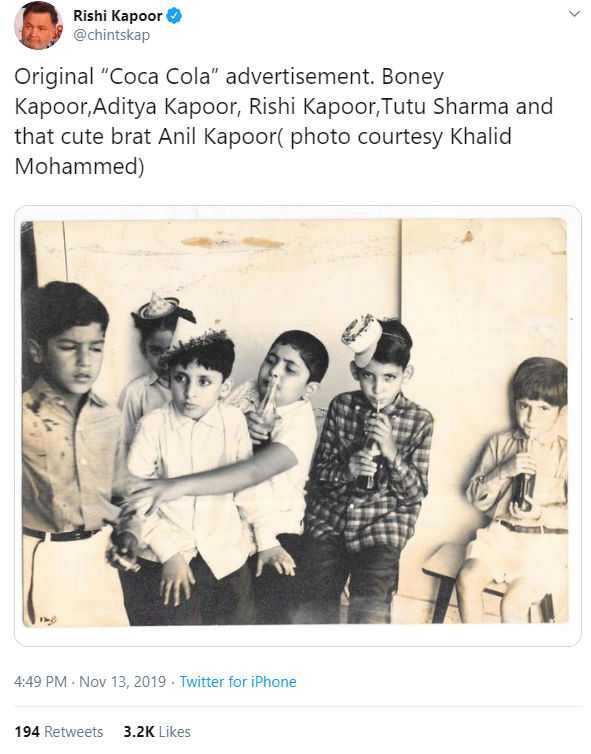 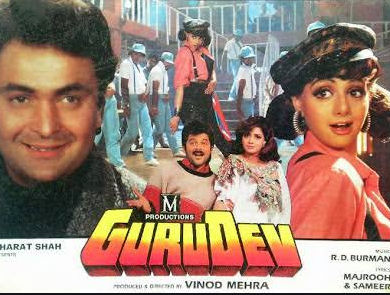 Who would’ve thought then that Rishi Kapoor and Anil Kapoor would go on to become big stars of that era? They even shared screen space, in films like Vijay, Gurudev and Karobar. In fact, Rishi Kapoor’s son Ranbir and Anil Kapoor’s daughter Sonam K Ahuja made their debut together in Sanjay Leela Bhansali’s Saawariya in 2007.

A post shared by Bhansali Productions (@bhansaliproductions) on Nov 9, 2019 at 6:36am PST