Arjun Kapoor Rages Red-hot At Troll Who Hurled A Low Jibe Over His Now-demolished Gym, Gives Expletive-filled Lesson In Sensitivity

Arjun Kapoor loses his cool at a troll. Here's what happened -

Arjun Kapoor lost his cool on Twitter when a troll attacked the actor when he was discussing a serious issue about the recent bridge collapse in Mumbai.

It all started with photographer Atul Kasbekar sharing an article about BMC and it's policies. To this Arjun replied saying, "I hope & pray this becomes a reality in mumbai city before it’s too late... we need to make our leaders & officers more accountable..."

And immediately, a troll commented and attacked the actor: "lol, this is the same actor who built illegal gym at home, didn't remove it after multiple notices by BMC, finally BMC had to come and get it demolished! 😂🤣They also had to demolish illegal construction last year in his uncle Anil's office!" 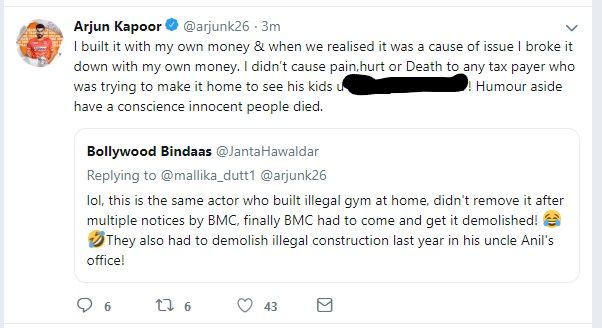 Arjun Kapoor's anger touched the roof and he gave an unyielding reply to the troll, setting the record straight (in the process of which also used an expletive which has been expunged in this article). 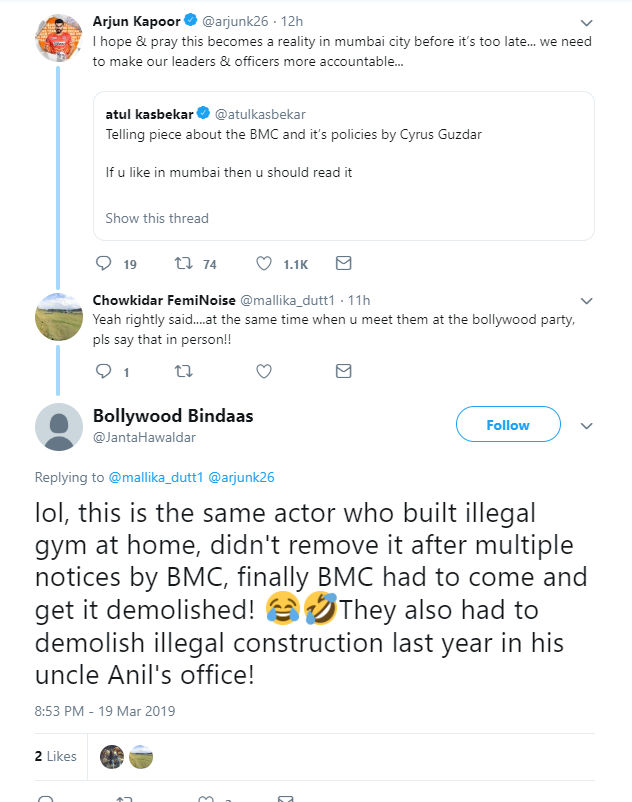 He wrote: "I built it with my own money & when we realised it was a cause of issue I broke it down with my own money. I didn’t cause pain,hurt or Death to any tax payer who was trying to make it home to see his kids! Humour aside have a conscience innocent people died."

For those unaware, the controversy above was in 2017. Parag Masurkar, assistant municipal commissioner of K (west) ward had then said, “We demolished the illegal structure on the terrace around 6pm on Monday and the terrace is now open.” Brihanmumbai Municipal Corporation (BMC) had issued a notice for illegally constructing a window wall and a metal sheet in the form of roof over his terrace. The demolition was carried out over four days.

PEOPLE HAVE PLEDGED SO FAR
Shah Rukh Khan and AbRam are all set with their gear for the 'Winter Playground' in Courchevel
Dia Mirza talks about her preparation for 'Thappad', says 'A friend's advice helped a lot'
PeeCee achieves milestone, becomes the 2nd Indian with 50 million Instagram followers
Salman Khan to say 'hello brother' as he teams up with Aayush for gangster-themed film?
Here's what happened when Saif Ali Khan was the guest on wife Kareena Kapoor's radio show
Sara Ali Khan's best scenes from 'Kedarnath' that shouldn't be missed
DO NOT MISS
MNS THREATENS WARIS PATHAN
MEA: ABRAHAMS SENT BACK 'IZZAT SE'
ACTIVIST HECKLED OUT OF RALLY
BJP TAKES AIM AT SHIV SENA
WHOSE BOWLING ACTION BEST?
ZUCKERBERG GETS ARMPITS BLOW-DRIED