Amid reports of Athiya Shetty-KL Rahul being a couple, the actor said that her relationships are personal, private to her and that she wouldn't open up on it.

The link-ups between cricketers and Bollywood stars have been going on for decades. Right from Mansoor Ali Khan Pataudi-Sharmila Tagore to Virat Kohli-Anushka Sharma, many such pairs have been rumoured to be dating, some who actually were in a relationship, some who parted ways and some who got hitched. And another pair in this list of late has been Athiya Shetty and KL Rahul. Apart from the duo’s connection to Karnataka, there’s something brewing between the two, if the rumour mills are to be believed.  While their appearances together for ‘dates’ and other pictures had made headlines over the last few months, their Instagram-bonding recently has got their fans excited. Now, Athiya has finally broken her silence over the relationship rumours. The actor, however, refused to either accept or deny the relationshoip, stating that it was something ‘personal and private’ for her, something she was not comfortable in talking about.

READ: KL Rahul's B'day Pic For Athiya Shetty Will Remind You Of Alia-Ranbir

In a recent interview with an entertainment portal, Athiya was asked about the link-up reports and if it affected her. The actor said no, and added that she had her ‘poker face’ (look with no notable expression) on with regards to this aspect. That’s the reason, she said, the media persons won’t get any response from her in this matter. The Hero star said she understood the journalists asking her questions about her personal life. However, the 27-year-old said that family, relationships and friendships were something extremely ‘private and personal’ for her. Athiya said she would always protect this and never talk about this aspect of her life.

READ: Were KL Rahul And Nidhhi Agerwal In A Relationship? Actor Answers

The link-up reports of KL Rahul-Athiya Shetty had begun when they were clicked along with Akansha Ranjan, who is Alia Bhatt's BFF and her parents are also connected to Bollywood. ncidentally, the cricketer was also linked to Akansha at that time. At that time, designer Vikram Phadnis had teased Athiya by asking if she’d like to go to 'KL, Kuala Lampur.' Later, they went out together to restaurants and it was considered ‘dates.’ The opening batsman’s recent birthday wish for the actor really broke the Internet, as the duo was seen laughing while glancing into each other’s eyes. The Mubarakan star also responded to the wish with heart emojis. 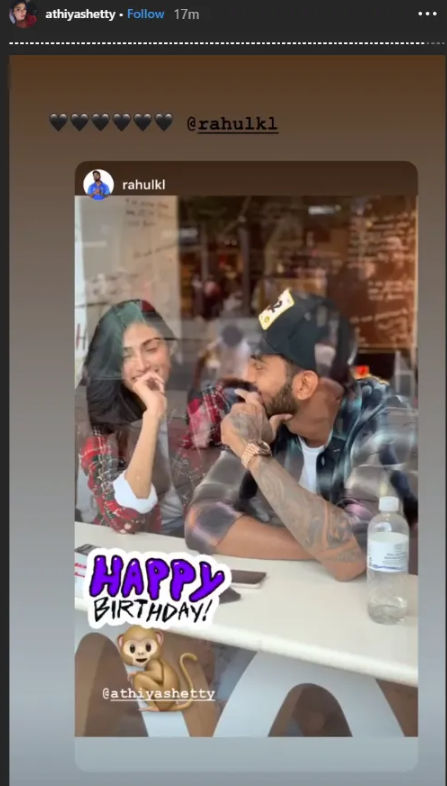 Meanwhile, on the professional front, Athiya is currently gearing up for the release of Motichoor Chaknachoor. This will be Athiya’s third film. KL Rahul, on the other hand, is a member of the Indian squad in the ongoing T20I series against Bangladesh.