Ayushmann Khurrana Is Anything But A 'nerd' In This Bathroom Selfie

Ayushmann Khurrana is also known among his fans and followers for his amazing style statements; Ayushmann is anything but a 'nerd' in his recent story

Ayushmann Khurrana is having a brilliant time in his career due to back-to-back successes. A run that he started in 2017, which includes seven films, is continuing with lots of power in the writing and performance. Though some of these movies were put in the ‘content-driven’ category and were not big hits as such, the actor’s films are also minting moolah at the box office of late. 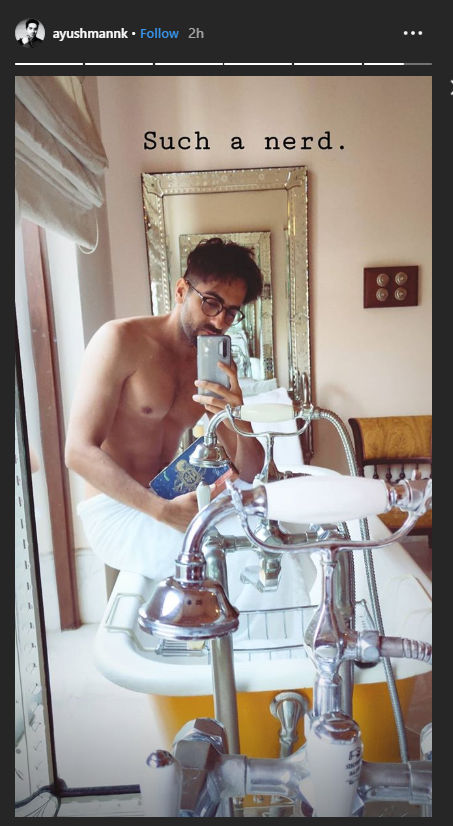 Ayushmann looks stunning in all the ensembles he opts for. The actor keeps experimenting with her looks a lot. He was even seen sporting some quirky outfit that looked really classy on the actor. He has also worn spectacles several times and that complimented his look just perfectly. Here are times he opted for spectacles look:

On the professional front, Ayushmann has two upcoming films lined up for 2020. He will once again be sharing the screen space with Bhumi Pednekar after his recent movie Bala. Both will be seen soon seen in the movie Shubh Mangal Zyada Saavdhan. The actor also has another film with his debut director Shoojit Sircar titled Gulabo Sitabo. The movie will also feature the veteran Amitabh Bachchan. The movie is scheduled to release in the month of February 2020 and the fans already seem to be excited about the movie. The Vicky Donor actor must definitely be honoured to share the screen for the first time with veteran actor Amitabh Bachchan.

Also Read | Did You Know Ayushmann Khurrana Has A Real-life Connection With Vicky Donor?