Deepika Padukone A Favourite Of Shoojit Sircar; Here's The Equation

Every director loves Deepika Padukone and so does the Vicky Donor director, Shoojit Sircar. Read here to know why the actor is one of Sircar's favourites

Deepika Padukone is a very popular name in Bollywood and there is a reason for that. All directors would love to cast her in their movies. But Shoojit Sircar has a totally different approach. He had gone on record to say:

"Deepika is one of my favourites. Whenever my writers and I talk, we always think, 'what can we do with Deepika' because I'm so fond of her."

Shoojit Sircar’s experience of working with Deepika Padukone in Piku

They had paired up for the movie Piku which also cast Amitabh Bachchan and Irrfan Khan. The film explored a father-daughter relationship, with the movie containing a sweet, simple feel-good plot. When asked about his working experience with the Piku actor, Sircar said that it was a brilliant experience, and added, "Frankly, while working on Piku, I saw the real actress and real creativity in her; and what she is as a soul."

"My revelation was that she is a simple, girl-next-door soul, despite having done many other films and potboilers. Now, I am working on and thinking about something wherein Deepika and I can work together, added the director."

Also Read: Deepika Padukone Is Creating An Empire With Her Smart Investments 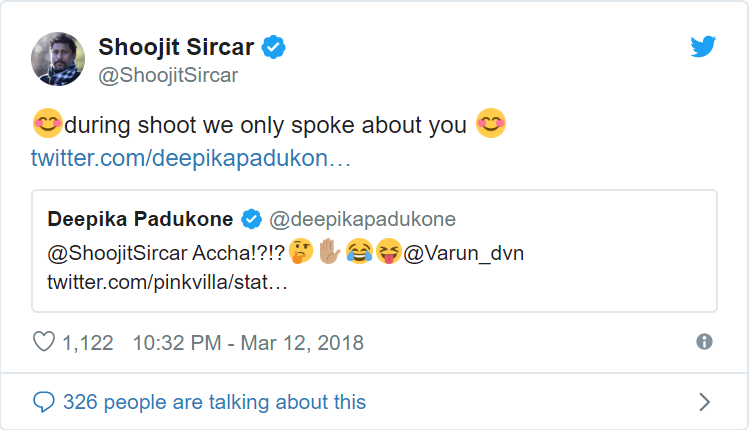 The two had a mock banter on Shoojit Sircar’s post that Varun Dhawan is his ‘jigar ka tukda’. While Deepika commented “Achha”, Sircar replied that he and Varun talked only about her on the sets. To this Deepika replied, “Proof chahiye dada…proof”. In an interview, when asked about it, Shoojit said

"Deepika is my sweetheart, as is Irrfan (Khan). Yes, she has certain expectations from me and both Juhi (Chaturvedi, writer) and I are working on something with her in mind."

Incidentally, Deepika Padukone was also asked to play the female role in October. But the actor denied saying the movie was mostly from the male point of view. Then, newbie Banita Sandhu was chosen for the job. And as we all know, she did a marvellous job in it.

Piku won Deepika much appreciation and also a Filmfare Award for Best Actor (Female). It is even considered to be one of the best movies in her career so far. Shoojit Sircar, Deepika Padukone and Irrfan Khan were supposed to collaborate on another movie. But the actor’s ailing health put the production on hold. Both Deepika and Shoojit has wished Irrfan a speedy recovery. Deepika has even asked everyone to give the actor some space at the moment instead of speculating on his condition.

Also Read: Deepika Padukone: "Marrying Ranveer Was The Best Decision Of My Life"

Also Read: Deepika Padukone Tells Ranveer Singh Her Plan To 'save Some Money'