The Bharat actor took to Instagram to share her woes through a story update as she hurt her knees while rehearsing her dance sequences for upcoming film Radhe.

Post the success of Salman Khan-starrer Bharat, Disha Patani is all set to star in her next collaboration with Salman Khan in Prabhudeva's Radhe: Your Most Wanted Bhai. Disha, who is busy with her preparations for her role in the movie, recently took to Instagram and updated her story with a picture of her sitting on the floor with injured knees. She wrote "Prabhu Sir's dance steps got me like #radhe #injuredknees" on her photo suggesting that she had sore knees after dance rehearsals with ace choreographer and film director Prabhudeva.

Take a look at her photo: 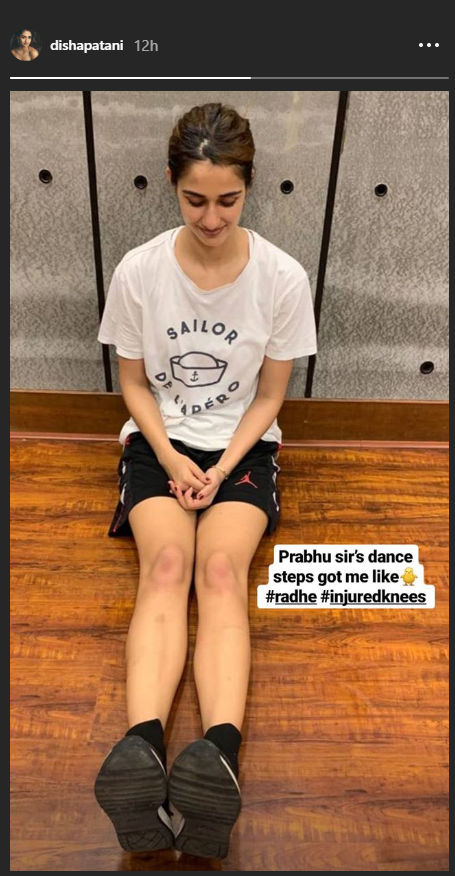 Salman Khan is currently occupied with the promotions of his upcoming movie in the Dabangg franchise. In his absence, Disha Patani has been working hard to prepare for her upcoming movie with the actor. She had also recently posted a photo of herself in a traditional attire which she had worn on the occasion of muhurat pooja to begin filming Prabhudeva's Radhe.

Read | Salman Khan: How Has He Been An Inspiration To Actor Disha Patani?

Have a look at Disha's photos:

What's next for Disha Patani?

Disha Patani has reportedly started filming for Prabhudeva's directorial Radhe only after wrapping up Mohit Suri's Malang which also features actors Aditya Roy Kapur, Anil Kapoor, and Kunal Khemmu. She is also set to star in Ashima Chibber's KTina where she is rumored to portray a role based on TV producer Ekta Kapoor. Her look for the movie was posted by Ekta Kapoor through her Instagram account and it created a lot of speculation online. Disha also has her own YouTube channel where she has posted videos on fitness and other events in her life.

Read | Disha Patani Speaks About Her Upcoming Movies In 2020

PEOPLE HAVE PLEDGED SO FAR
Disha Patani: All about the actor's successful modelling career
Disha Patani dazzled in a white outfit during 'Radhe' Mahurat Pooja
Salman Khan: How has he been an inspiration to actor Disha Patani?
Disha Patani: Here are some of the best ethnic attires of the actor
Radhe: Bharath to play a baddie opposite Salman Khan in the movie
Sonam Kapoor's pictures that give a glimpse of her exquisite jewellery collection
Rangoli Chandel hilariously pokes fun at Alia Bhatt, Ananya Panday over Filmfare awards
Bhumi Pednekar is a sight to behold in all-black ethnic, see pictures
DO NOT MISS
INDIA LEGENDS' SQUAD ANNOUNCED
ANOTHER JAMIA VIDEO EMERGES
SIBAL SLAMS CENTRE AND POLICE
CORONAVIRUS UPDATES ACROSS INDIA
AKHILESH YADAV SLAMS BJP OVER JAMIA
AMERICANS EVACUATED FROM SHIP