Disha Patani took to her social media stories on Tuesday and shared a glimpse of her 'de-glammed' look and blamed the quarantine for it. Take a look.

Disha Patani recently stunned everyone with her amazing performance in the film, Malang. Amid the Coronavirus lockdown, the actor is reportedly staying at rumoured beau Tiger Shroff's residence with him and his family. Patani is quite active on her social media and regularly keeps her fans updated about her life. She took to her social media stories on Tuesday and posted a de-glammed selfie. 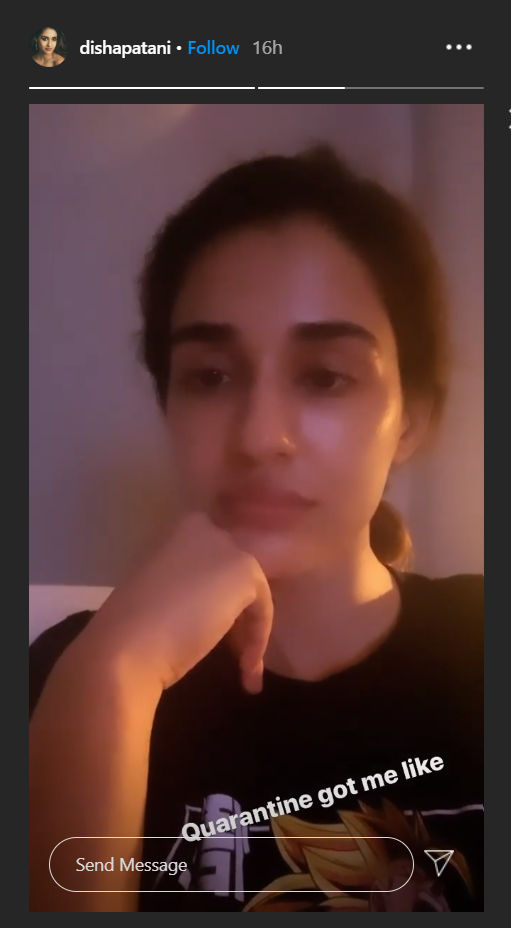 Though the actor is usually all dolled up with her appearance, she never shies away from going make-up free every once in a while. Sharing her make-up free look on her story, she is seen wearing a black t-shirt and has her hard tied up in a low messy bun. The actor captioned the boomerang as "Quarantine got me like".

Disha Patani has been winning hearts with her posts on her social media. She often shares videos of her dancing and a range of throwback pictures. Her camaraderie with Tiger's sister Krishna Shroff has been winning the internet. She also shared a video of her dancing to the tunes of Bored in the House with Krishna and captioned the post, "This is how we do it #quarintinelife  @kishushroff ðŸ‘­ðŸ¤£". [sic] Apart from all of this, the actor is also seen enjoying the quarantine with her furry friends as she often shares pictures and videos with her cats and dogs.

On the work front, Disha Patani was last seen in Malang alongside Anil Kapoor, Aditya Roy Kapoor, and Kunal Kemmu. Directed by Mohit Suri, the film revolves around Advait who visits and falls in love with a free-spirited girl named Sarah. They fall in love and things take a turn. Years later, Advait is on a killing spree with cops Aghase and Michael blocking his way.

The actor is set to star in three films for the year 2020. She will be seen in the Sundar C directorial Sangamithra which is set to be a periodic drama set in 8th century AD. She will also be a part of Ashima Chibber's directorial venture KTina. She has also been roped in for Salman Khan's Radhe: Your Most Wanted Bhai which will also star Jackie Shroff and Randeep Hooda.

Reportedly, the actor has also been signed up for Ek Villain 2. The film will reportedly star Tara Sutaria, Aditya Roy Kapoor, and John Abraham. The film was scheduled to go on the floors in July but the production has now been halted due to the Coronavirus lockdown.

ALSO READ | Disha Patani Shares A Picture Of Her Dog Goku Trying To Eat Her, Take A Look

PEOPLE HAVE PLEDGED SO FAR
LATEST NEWS
View all
6 hours ago
Esha gupta had sent house help on leave before lockdown, says 'relieved she’s with family'
9 hours ago
Sonu sood's reply to fan calling him 'amitabh bachchan' is winning the internet
6 hours ago
Ileana d'cruz shows how she is 'avoiding people' with a stunning underwater picture