Housefull 4: Akshay Kumar trolls Chunky Pandey with a viral meme on Twitter after the latter thanked him for all the lovely memories through the years.

Trust Akshay Kumar to come up with some hilarious comebacks and sense of humour! Popular for his role 'Pasta' in Housefull, Chunky Pandey took to his Twitter handle to thank Akshay Kumar for a million memories on the day of Housefull 4 trailer launch. But what happened next will leave you in splits! Pandey got a funny reply or should we say 'got trolled' by 'Khiladi' Kumar himself. 'Kesari' actor used his own viral meme that says, '50 rupaye kaat overacting ka' — a scene from Akshay's film 'Hera Pheri' (2000).

This is not the first time Akshay has responded to a star by using his own meme. Earlier too he posted a hilarious meme when Taapsee Pannu made a comment on the 'Forbes List'. Take a look - 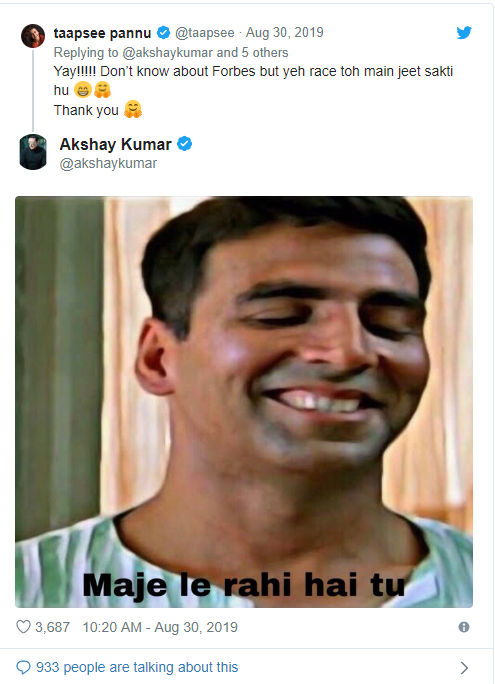 Superstar Akshay Kumar on Friday said it was production banner Nadiadwala Grandson's decision to not give Sajid Khan credit as a director on the fourth installment in the "Housefull" franchise. Sajid stepped down from his directing duties on "Housefull 4" in October last year after he was accused of sexual harassment by three women, including actor Saloni Chopra. Farhad Samji came on board to finish the film, the trailer of which was released on Friday.

READ: Housefull 4 Posters And Trailer: Audience Reactions To The Poster

"Sajid has directed 60 per cent of the film. But this is studio's call (to not give him credit). And that is how it going to happen now," Akshay told reporters here at the trailer launch of the comedy. The 51-year-old actor, who plays the lead in the movie, said film industry has become a more secure place after the #MeToo movement made its way to India last year. Asked if he would collaborate with Sajid again in future, Akshay said he is open to working with the director if he gets a clean chit.

"Well...See if he is acquitted with everything. I don't know what has happened exactly. And if he is acquitted I will surely work with him." "Housefull 4", also featuring Bobby Deol, Chunky Panday, Johnny Lever, Riteish Deshmukh, Kriti Sanon, Pooja Hegde and Kriti Kharbanda, will hit the theatres on October 25.

READ: Housefull 4: Quick Recap Of All The Movies Of The Housefull Franchise