After looks of Akshay Kumar, Riteish Deshmukh and Bobby Deol were shared, the female leads Kriti Sanon, Pooja Hegde and Kriti Kharbanda were introduced too.

The ‘Super Six’ of ‘Housefull 4’ have been unveiled as the first look posters of the ‘reincarnation comedy’, from both 1419 and 2019, were shared on social media on Wednesday. Akshay Kumar, the most prominent face of the franchise, interestingly, shared one look every hour. While he and Bobby Deol’s characters seemed like warriors, Riteish Deshmukh seemed to be a playing a classical dancer. The ladies, Kriti Sanon, Kriti Kharbanda and Pooja Hegde, however, were all princesses in the past and stylish girls in the present. The actors are seen dressed in traditional attires of that era in one poster and modern clothes in the recent.

READ: Housefull 4: Is Akshay Kumar's Next Film Is The Most Expensive Comedy? 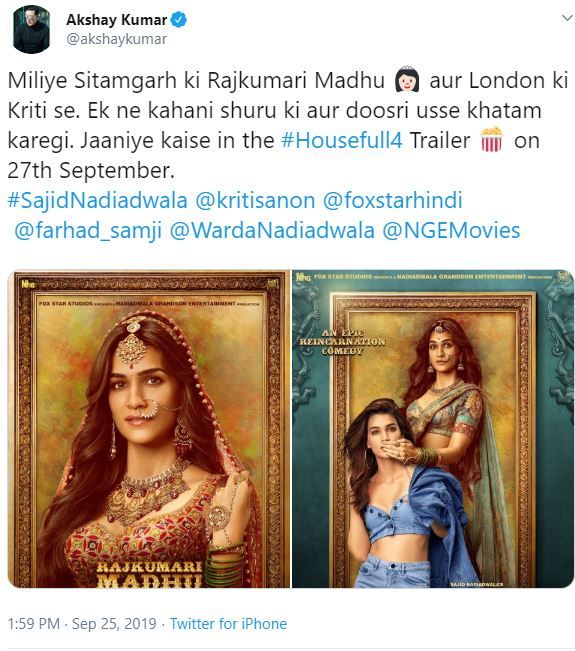 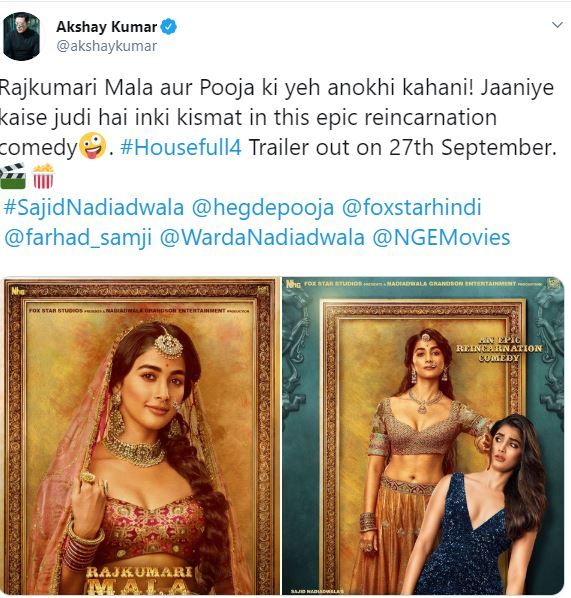 The other important members of the cast of ‘Housefull 4’ are Rana Daggubati, Chunky Panday, Johnny Lever, among others. It’d be interesting to see what their characters will be all about.

The trailer of ‘Housefull 4’ is gearing up for release on September 27. ‘Housefull 4’ is directed by Farhad Samji, one half of Sajid-Farhad director duo, who had directed ‘Housefull 3.’ Earlier, Sajid Khan was directing the movie, before he was replaced for the allegations against him in the #MeToo movement. Rana Dabbubati’s role, too, was set to be played by Nana Patekar previously, but he was replaced after the sexual harassment claims made by Tanushree Dutta.

‘Housefull 4’ is set to release on Diwali. However, they will have serious competition, as Taapsee Pannu-Bhumi Pednekar-starrer ‘Saand Ki Aankh’ and Rajkummar Rao-Mouni Roy’s ‘Made in China’ have also booked the festival release date this year. ‘Housefull 4’ has been produced by Sajid Nadiadwala and Fox Star India.

READ: Housefull 4: Nawazuddin Siddiqui To Play A Cameo In A Song Sequence