Ileana D'cruz on Saturday wrote a worrisome yet funny message on her Twitter handle. She said that she is 'almost convinced' that she sleepwalks. Here's why

Ileana D'cruz on Saturday wrote a worrisome yet a funny message on her Twitter handle. She said that she is 'almost convinced' that she sleep walks because she got up with bumps and bruises on her legs. She further on her Insta story wrote: 'I've just had an epiphany' and clarified that probably it is the 'midnight snack trip' that she takes to the fridge. Netizens instantly got worried and wrote comments like: "This is some scary sh#t, bro," another said: "This can be serious. Don't ignore." Another said: "Lol. Relax you'll be fine.", while the other compared it to the popular horror film and said: "Conjuring!". And finally, a few even gave some suggestions to solve the mystery by saying: "Keep a camera on recording before u go to sleep, ur doubts will be cleared." Take a look -

A few days back, Ileana took to her Instagram handle to share a picture flaunting her perfect abs. She wrote: "Fell flat on my face right before this shot. No seriously." 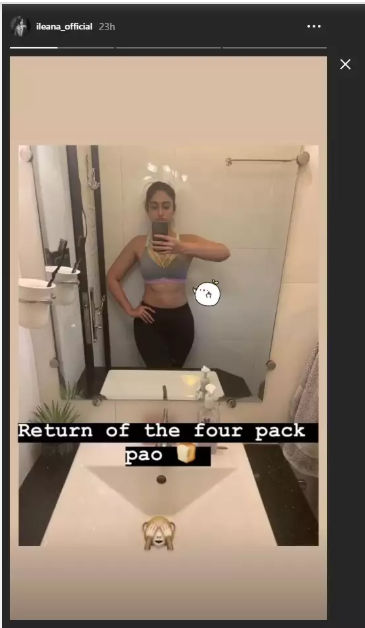 The actress will be seen in Aneez Bazmee's 'Pagalpanti' next. "Pagalpanti" features ensemble cast starring Anil Kapoor, John Abraham, Arshad Warsi, Pulkit Samrat, Kriti Kharbanda, Urvashi Rautela and Saurabh Shukla. The movie is produced by T-Series, Panorama Studios and co-produced by Aditya Chowksey and Sanjeev Joshi. Ileana D'Cruz has been missing from the limelight for quite a while, and in a prior interview had stated that she was balancing work and personal life.

READ: Ileana D'Cruz Is The Most Sensational Celebrity Of 2018 According To McAfee