Janhvi Kapoor Stuns In Retro Style, But Something Else Draws Attention

Janhvi Kapoor posted a picture on Instagram, where she can be seen acing the retro style. However, it is something else that has caught everyone's attention

Janhvi Kapoor who is currently in New York spending some quality time with her sister Khushi Kapoor and father Boney Kapoor took to Instagram to share pictures where she can be seen acing the retro style! Dressed in a floral top, retro frames and minimal make-up, the social media post consists of all things love. One can say that she certainly wins the caption and the picture game on Instagram this time Take a look below-

READ: Janhvi Kapoor Invites Paps For A Ride, Her Fun Banter Is Unmissable

Netizens can't stop showering love on the picture. "This is so beautiful", "My Love", "Is looking sexy while waiting part of the mood" were some of the comments that were flooded on the post. However, it is her caption that has been a major talking point on the internet. "Waiting for fries is a constant mood", she wrote. Take a look below- 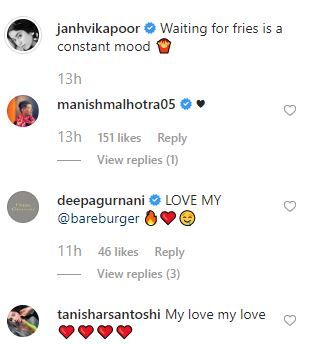 Janhvi Kapoor will essay the lead role in an upcoming venture titled 'Gunjan Saxena: The Kargil Girl' which is based on the life of IAF officer Gunjan Saxena, who is one of the first female pilots to fly in combat. She played an important role in rescuing injured soldiers during the Kargil War in 1999 and was awarded the gallantry Shaurya Vir Award for displaying courage during the war.

This is going to be the first time Janhvi Kapoor will be portraying a real-life person following her debut in 'Dhadak'. Directed by Sharan Sharma, 'The Kargil Girl' also stars Vineet Kumar Singh, Angad Bedi and Manav Vij in pivotal roles. The upcoming biopic is jointly produced by Dharma Productions and Zee Studios and is set to hit theatres on March 13, 2020.