John Abraham Says 'Satyameva Jayate 2' Creates Own 'Avengers', Jokes 'replace All With Me'

John Abraham said that 'Satyameva Jayate 2' created own set of 'Avengers'. He reacted to question on replacing Hulk by saying, 'replace all with me'. 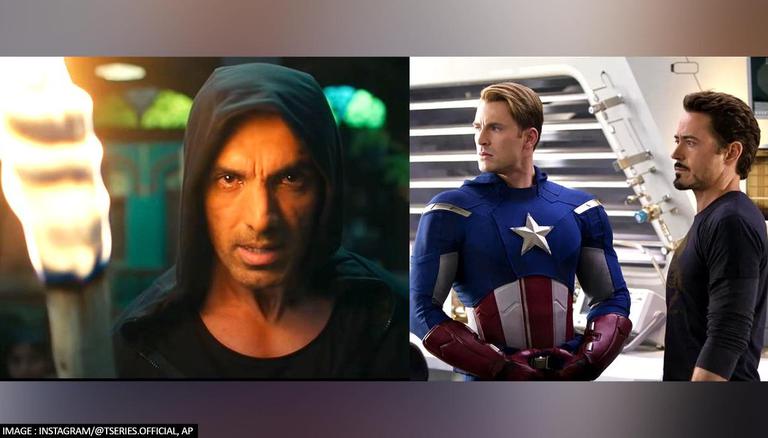 
John Abraham is doing some extraordinary feats with his characters in Satyameva Jayate 2. Not only is he beating the baddies mercilessly, breaking solid objects on them, but he is also throwing men and even vehicles like cars around for fun. He plays three characters in the venture, set in two eras.

The actor now believes that he can be a replacement for Hulk and all other Avengers. John even said that the makers of Satyameva Jayate 2 had created their own Avengers with the character.

John Abraham, in an interview with Pinkvilla, reacted to the different comments made by netizens on the trailer of Satyameva Jayate 2. He first shared his views on the comments on his physique, first who were marvelling at his abs and wanting to see him shirtless more often. The Garam Masala star replied that he had worked hard for it.

He also joked that he was giving Akshay Kumar's 3 films a year policy competition by doing three roles in one film itself.

Later, one of the comments, read, 'Marvel Studios after seeing this trailer, let's replace Hulk with John." John replied that it could 'very easily' be done. He then gave a message to Marvel Studios, that they had created their own Hulk and their own Avengers with Satyameva Jayate 2.

Continuing his statement, which he seemed to have made in jest, he asked the superhero makers to replace all the Avengers with him.

Meanwhile, Satyameva Jayate 2 is gearing up for release on November 25. The movie is the second instalment of the franchise, of a vigilante-cop brothers face-off, Satyameva Jayate, which was released in 2018.

While that film featured Manoj Bajpayee as John Abraham's character's brother, where he himself is playing the role of the brother, in this case, twins. A flashback track features John again in the role of their father, making it three roles.

Divya Khosla Kumar plays the role of the wife of the flashback character and the mother of the twins. The venture also stars Anup Soni, Gautami Kapoor, among others.