Good News! Kalki Koechlin is pregnant with beau Guy Hershberg. Five months into pregnancy, the actress revealed that she will deliver the baby through water birth. Talking about motherhood in an interview with HT Brunch, Kalki said, "I already feel the changes in the way I react to things. I am more deliberate, slower, more patient. When motherhood comes eventually, it brings with it a new consciousness to your sense of person."

Kalki Koechlin makes it Insta-official with her 'favourite caveman'

Kalki and Guy have been together for around five years now. Talking about the name of the child that they have picked up, Kalki said, "I’ve chosen a name that works for either gender and that is representative of a gay person, because I want my child to have that freedom of movement under the many umbrellas of gender that we have."

For those unaware, Guy is an Israeli classical pianist. Kalki and Guy both come from different cultures and hence the child's identity holds more relevance to Kalki than its gender. French, Iranian, Israeli descent and Aurovillian, Tamil clubbed with Hindi film industry and Western classical music --- Kalki's child will probably grow up learning many languages. Kalki in the interview said that she is aware of these struggles that her child might have to face, and "et I am grateful for the mixture of influences that I have had," she was quoted saying. 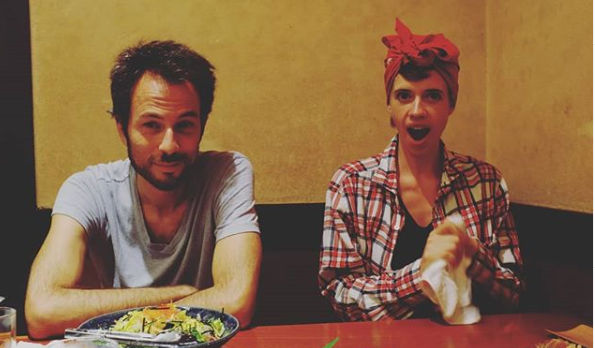 Kalki Koechlin was previously married to renowned filmmaker Anurag Kashyap who directed her critically acclaimed film 'That Girl in Yellow Boots'. The pair tied the knot in April 2011 after almost two years of dating got divorced in 2015. However, unlike most separated couples,  Kalki Koechlin and Anurag Kashyap are known to be good friends. Recently, they collaborated for Netflix's 'Sacred Games 2'.

ON THE PROFESSIONAL FRONT

Kalki Koechlin who last graced the big screen in Zoya Akhtar's 'Gully Boy' starring Ranveer Singh and Alia Bhatt, has now stirred the internet with her remarkable performance in Netflix's web series 'Sacred Games 2'. On the show, the 35-year-old actor plays Batya Abelman, an apprentice of Guruji, played by Pankaj Tripathi. She recently wrapped up shooting a Tamil episodic film for a Netflix series with director Vignesh Shivan. She will also be seen in Season 2 of 'My Indian Life'. She has a podcast for the BBC. And post this, she is the lead in a play written by Rehaan Engineer. The play is an adaptation of Chekov’s Uncle Vanya and will make its debut in the Serendipity Arts Festival in Goa.