Kiara Advani's Lookalike Aishwarya Gets Candid About Fame; 'people Mistook Me To Be Her'

Kiara Advani's doppelganger Aishwarya Singh who took to the internet by storm with her recreation of the actor from the blockbuster hit 'Shershaah'. 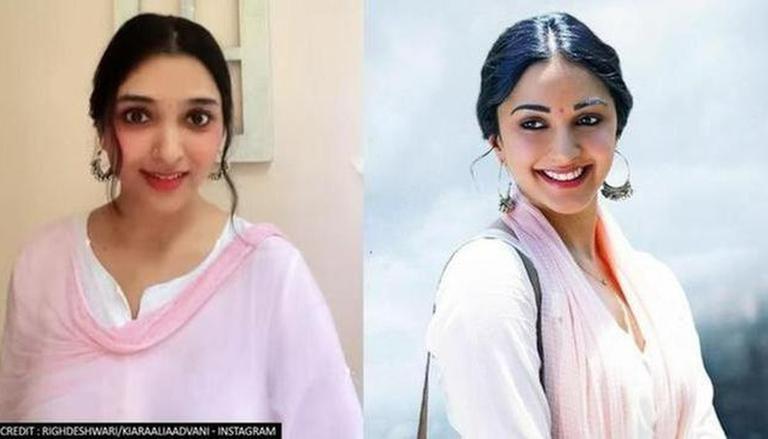 
It is not uncommon for celebrity lookalikes to find fame on the internet, especially with the current boom of social media platforms turning normal people into celebrities overnight. One of such instances is the Shershaah actor Kiara Advani doppelganger Aishwarya Singh who garnered over 7 lakh views on her video recreating the actor's famous look from the biographical war film. Her uncanny resemblance was enough to turn her into the official lookalike of Kiara Advani as Aishwarya has now revealed that many have mistaken her to be the actor.

During an interview with Hindustan Times, the Delhi-based dentist-cum-influencer opened up about her fame post her viral video where she recreated Kiara's look as Dimple Cheema in Shershaah. Donning a white salwar kameez with a pink dupatta, she perfected the look with pink glowy makeup and a low bun. She also lip-synced to Advani's dialogue in the movie and even sported a pair of sunglasses to recreate one of the most memorable scenes from the movie. The video stumbled across Kiara's timeline who reacted to the post saying, ''Killing It''.

The young influencer stated that she felt 'wonderful' for being compared with 'such a beauty' and getting recognition from the viral video. She further revealed that many would call her 'true copy’, ‘doppelganger’ and ‘ditto' and urged her to recreate more videos. Aishwarya admitted to being on cloud nine after receiving a compliment from Kiara herself.

The 26-year-old, who is currently enjoying a following of 56k, hopes to meet Kiara soon stating that it would be a dream come true for her. Meanwhile, Aishwarya has continued her hobby of creating videos on Instagram as her page is now filled with lifestyle and fashion related content as she revealed in the interview that she loves participating in fashion shows and dance events. Exploring the option of trying her hand out in acting, she revealed to keeping her options open with venturing into content, photography and acting in the future.

Meanwhile, on the work front, Kiara Advani is also set to appear in the supernatural comedy Bhool Bhulaiyaa 2, Jug Jugg Jeeyo and Mr. Lele. The actor also announced her excitement to star in her first Pan Indian film opposite Ram Charan as she took to her Instagram to unveil the poster.