One of the most anticipated films of the year, Love Aaj Kal releases on Friday. The movie starring Sara Ali Khan and Kartik Aaryan has been directed by Imtiaz Ali. Here are all the live updates:

One of the most anticipated films of the year, Love Aaj Kal releases on Friday. The movie starring Sara Ali Khan and Kartik Aaryan has been directed by Imtiaz Ali. Here are all the live updates:
Starts well at box office
1 week ago | February 14, 2020 19:32

'Love Aaj Kal' enjoyed a decent opening at the box office in the the morning and afternoon shows. The occupancy is said to be 20-25 per cent, which is considered good. The footfalls are expected to increase in the evening shows, with the start of weekend and Valentine's Day set to work in the film's favour.

From playing the badass cop in Risk to love story narrator in Luv Aaj Kal Randeep Hooda truly justifies that he's been the most underrated actor in the industry.🙌🏼 pic.twitter.com/bAzxfc8gai

‘Love Aaj Kal 2020’ is a major disappointment... it’s confusing, repetitive and boring at many places. Read my review of Imtiaz Ali’s fresh take on his ‘Love Aaj Kal’ (2009). https://t.co/uQQmgFN9i2

Kartik Aaryan  is pleased with the response to Love Aaj Kal as he shared 'Reviews Aaj Kal' and conveyed his gratitude to the critics.

Well-known journalists/trade analysts felt Kartik Aaryan has given his career-best performance in the movie.

#LoveAajKal is what you call as *a thinking lovers’ film*. With an altogether different take on modern day relationship & its complexities, it would be most relatable to those who are finding love and exploring the depth of it. This is primarily for the urban youth.

Inarguably, this is @TheAaryanKartik’s CAREER BEST performance till date. As three different characters (yes, that’s right), he aces it, and now. Especially the Delhi character was the toughest to enact and needed a borderline performance, something that he gets right #LoveAajKal

#SaraAliKhan is indeed a find. From #Kedarnath to #Simmba and now #LoveAajKal, she nails a truly complex part. She acts quite well, looks great, has just the right body language and announces that she has arrived #LoveAajKal

.@RandeepHooda is adorable in #LoveAajKal. He has a very crucial part, is there from start to finish, and brings all his maturity into play. Enacting his age, he is integral to the film. Ditto for newcomer #AarushiSharma who says a lot with her facial expressions than dialogues

#LoveAajKal ought to be my boy @TheAaryanKartik ‘s career-best performance. He’s so nuanced and restrained... it’s great to see him grow leaps and bounds in a span of merely nine years! Bravo brother, bravo.

Actor and Priyanka Chopra's cousin Meera Chopra said it was refreshing to watch Randeep Hooda on the big screen and that he should do more films.

It was so nice and refreshing to see @RandeepHooda on screen after so long. Plz do more films!!! #LoveAajKal2

As some of the initial reviews termed the movie 'boring', netizens came up with memes, from stills of movies like Kabir Singh, calling the experience 'daring' and 'searching' for story in it. Here are some of the memes:

#LoveAajKalReview
My Friend: Why did you watched Love Aaj Kal 2
Me: pic.twitter.com/YtpN4QwVji

The love story has got mixed reviews till now. The characters and relationship between the characters was termed ‘complex’. The performances and direction were lauded by some, while a lot of them termed it ‘flawed’ and ‘boring’ too. Some reviewers gave it three stars out of five, and some gave two stars.

#LoveAajKalReview : ⭐️⭐️⭐️
It sets off to celebrate complex characters and dysfunctional relationships with emotion of love at its core. Soundtrack is rich, helps in storytelling. #KartikAaryan and #SaraAliKhan have given their best shot. #ImtiazAli’s story is good. #LoveAajKal. pic.twitter.com/8cQvpoH2Yf

#LoveAajKal Review: #ImtiazAli captured the complex relationship very well. @TheAaryanKartik outdone himself, it was good to see him showing different shades in his 1990 character. @mysarakhan as Zoie is very relatable, some scenes, she over did it, but it was an honest attempt pic.twitter.com/JXYJvMtEFa

Negatives: Story is not fresh, Screenplay is dull & confusing, Editing is average!

Ohh Godd what I have just watched.. Such a boring film.. Total crap full of bakwaas #LoveAajKal#LoveAajKalReview #KartikAaryan #SaraAliKhan #ImtiazAli

#LoveAajKalReview - Kartik Aaryan and Sara Ali Khan's cute chemistry is the highlight in this Imtiaz Ali directorial! Randeep and Arushi play their parts well! Overall a good watch for the youth and couples this Valentines Day! #LoveAajKal

Film ended & everyone in the audience is yawning & stretching as if they woke up from the deepest slumber, including me😴😴 Also, now I have a new found respect for Jab Harry Met Sejal🙏 #LoveAajKalReview #LoveAajKal

A screening for the film was held a day before on Thursday. The lead pair arrived on a bike and were all smiles. They even laughed as the paparazzi shouted ‘Bhabhi kaun bola?’

Their co-star in the film, Randeep Hooda, Urvashi Rautela, Zareen Khan and Diana Penty were among the others who watched it before the ‘First Day, First Show.’ 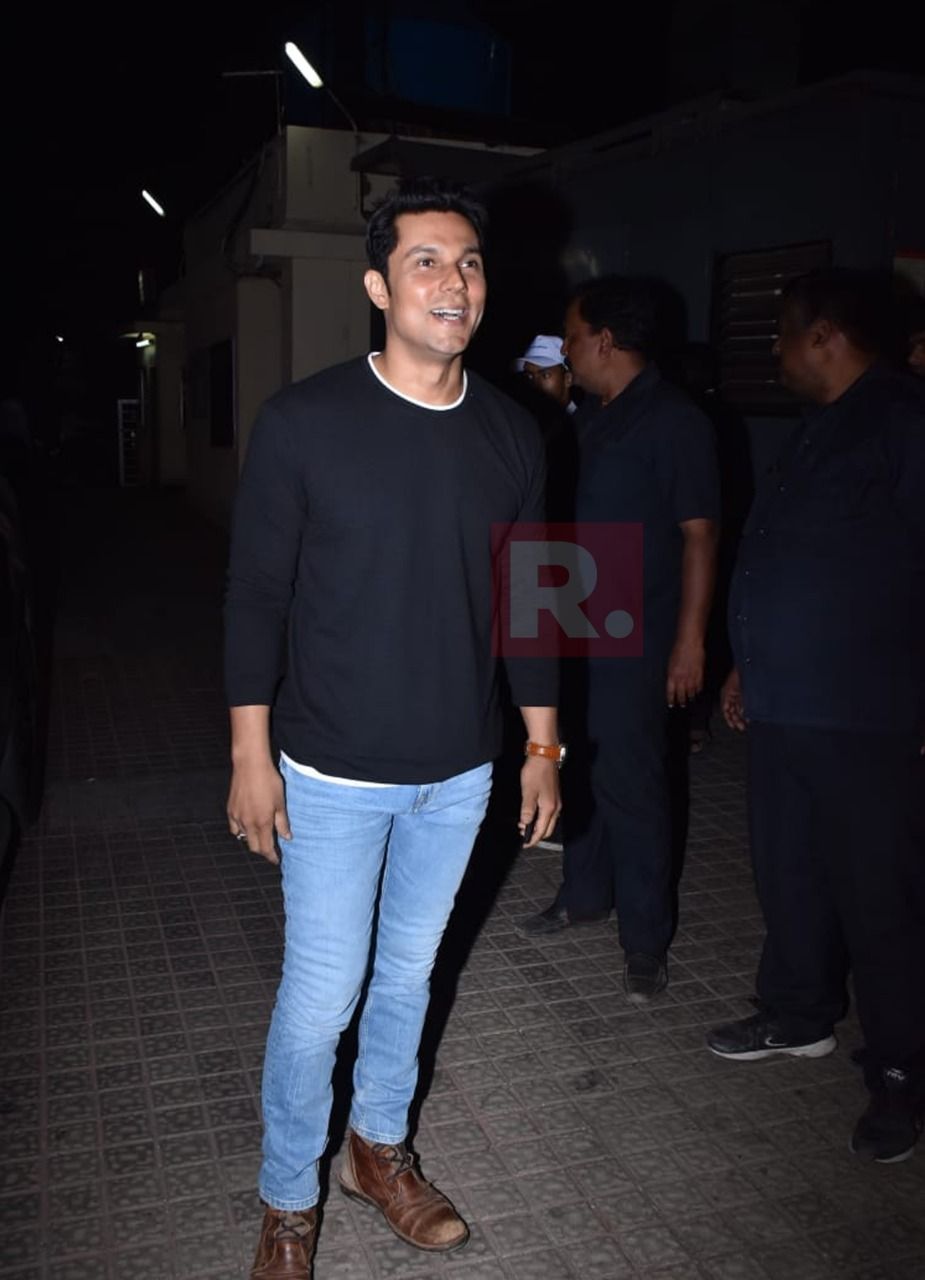 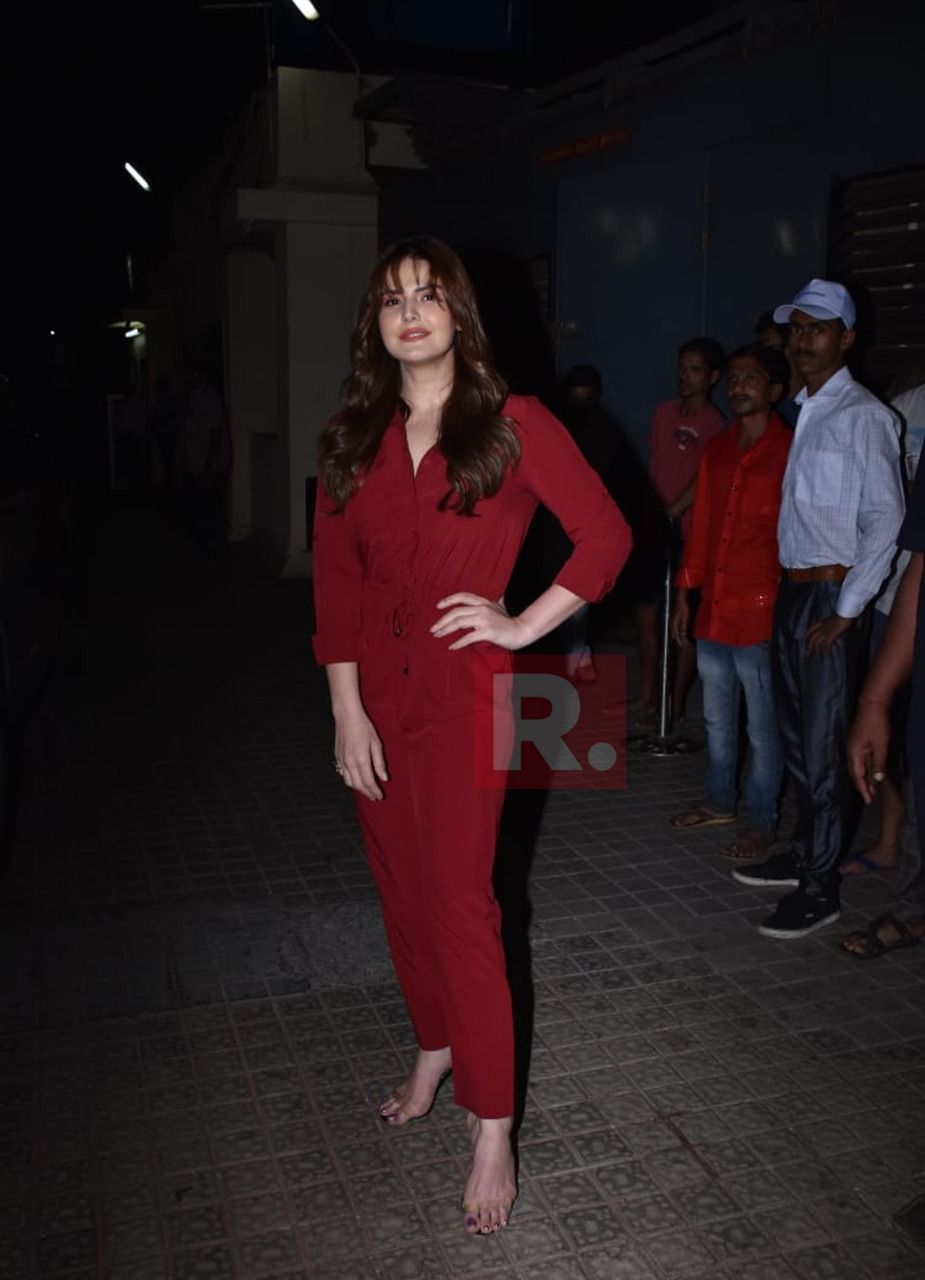 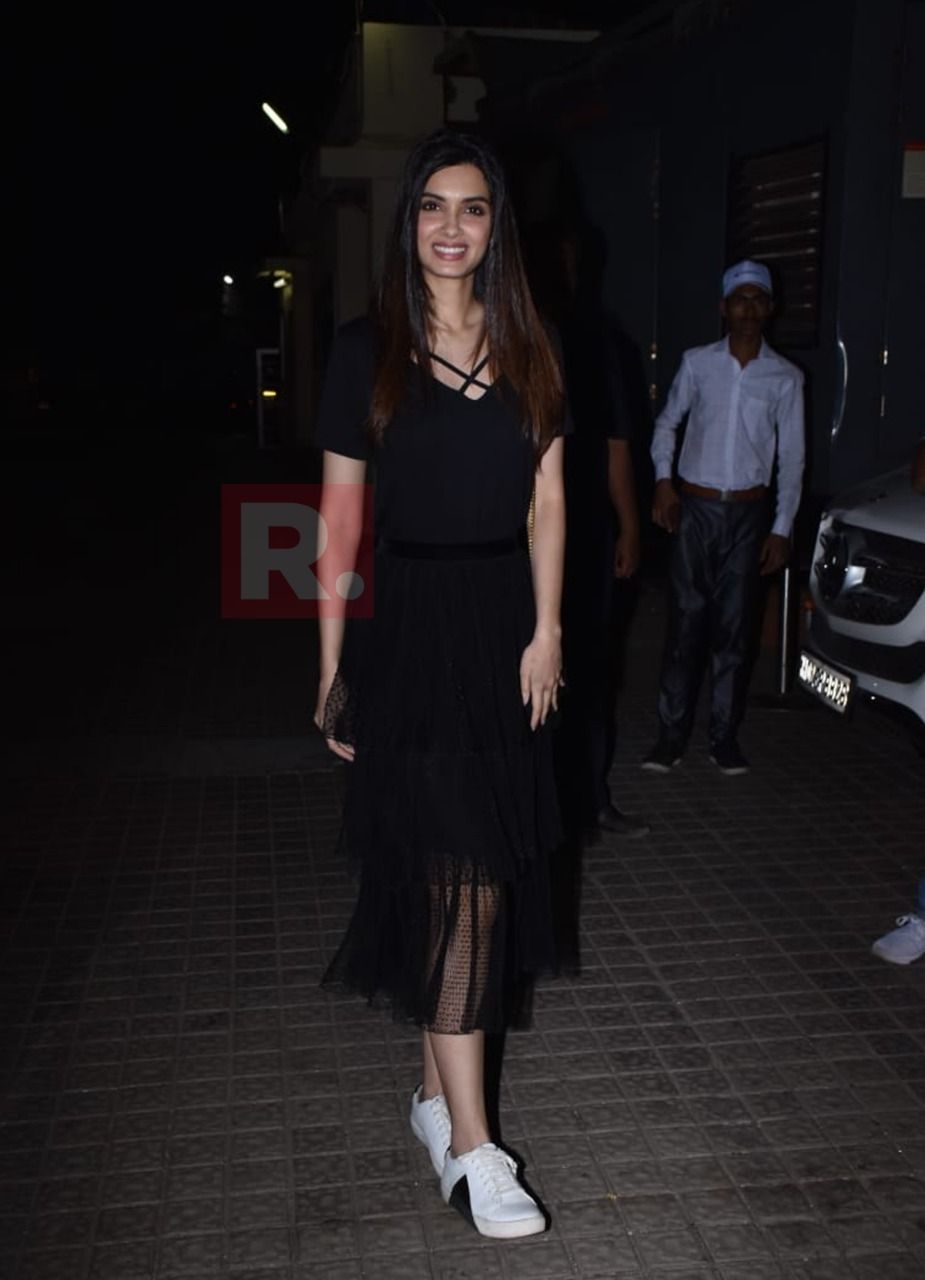 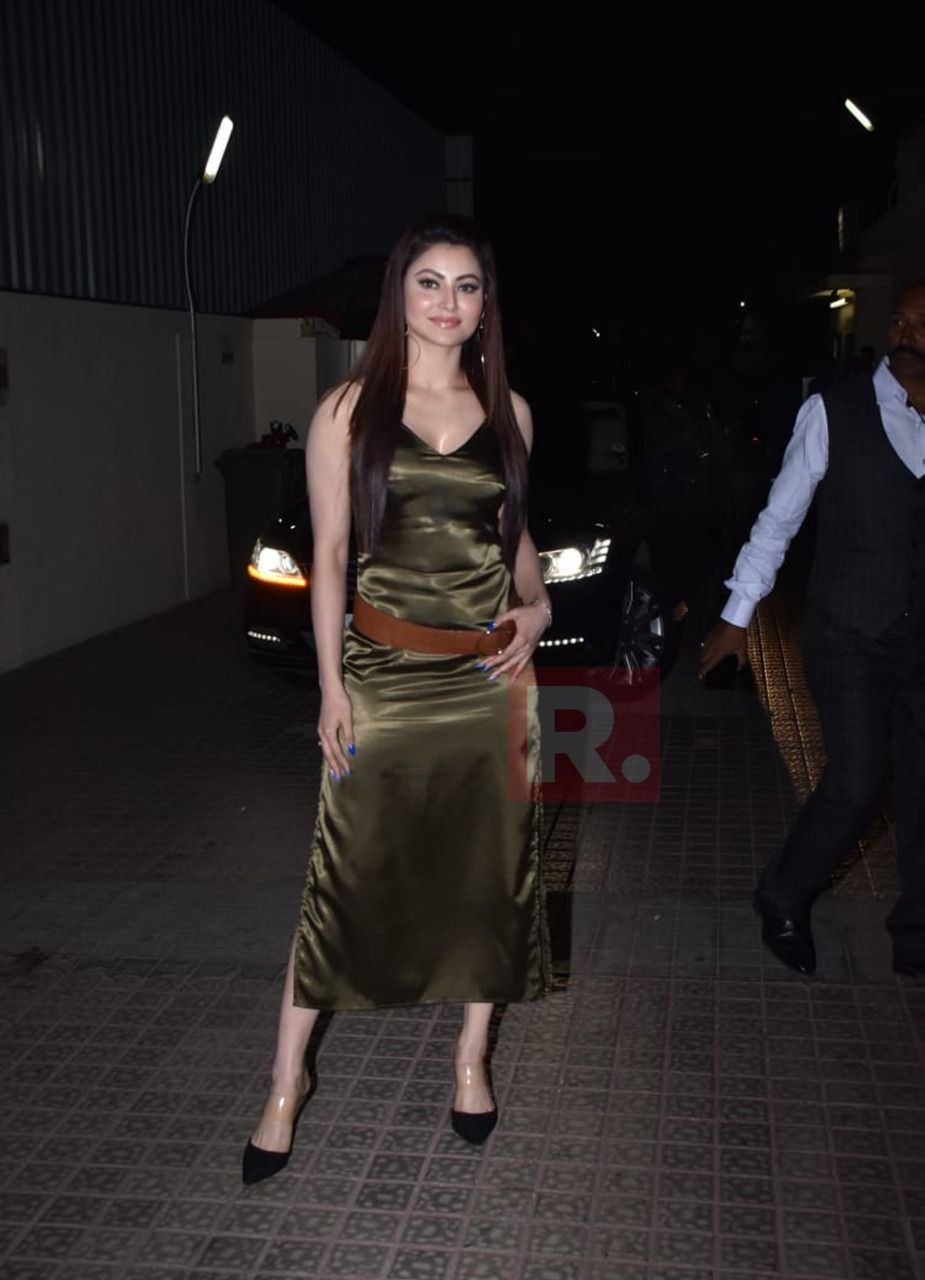 The album, composed by Pritam, is being lapped by the audiences. The fun-filled party track Haan Main Galat, which features the trademark Twist hook from the original, has been a rage minting 46 million views on YouTube already. Romantic tracks like Rahogi Meri and Mehrama is also finding love online. Watch here:

The lead pair has been in the news ever since Sara Ali Khan on a chat show said she had a crush on Kartik Aaryan. The duo then made interesting statements, with media joining the banter, before they were announced as the lead of the Imtiaz Ali directorial. Several pictures and videos of the duo during the shoot went viral, and before one could realise, reports of their relationship started doing the rounds.

However, as the shoot concluded, break-up reports have also surfaced. At the same time, Kartik got linked to his Pati Patni Aur Woh co-star Ananya Panday.

However, as Love Aaj Kal gears up for release, Sara and Kartik have once again been seen bonding. Be it posting adorable snaps on Instagram, having a banter in the comments or grooving together during promotional events across the nation, fans have got excited. Some of the moments like Kartik lifting Sara in his arms or shielding her from the crowd, have made fans coin the term ‘Sartik’ for them, while the guys have also started calling her ‘Bhabhi.’

Here are some of their fun moments:

I promise you My expression is becoz of the food ! #VeerZoe

One of the most anticipated films of the year, Love Aaj Kal has finally hit the theatres. Be it Imtiaz Ali bringing back his love tale of two eras in a new package, the fresh pairing of Sara Ali Khan-Kartik Aaryan amid their alleged relationship or the lack of it or the chartbuster album, there is a lot that fans have been looking forward to. Here we take a look at all the major happenings surrounding the movie on its release day.

First, before the reviews start coming, should one judge the movie on the basis of its trailer? See for yourself and decide if you’d like to watch the movie: