Makers of the upcoming release Meenakshi Sundareshwar starring Abhimanyu Dassani and Sanya Malhotra in the lead have released the trailer. 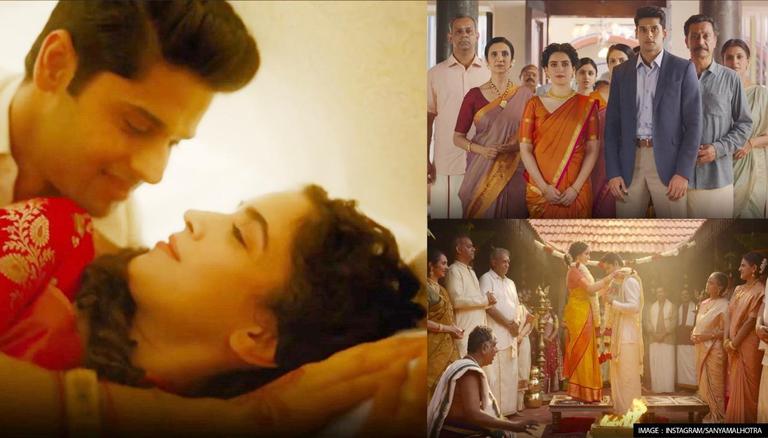 
Makers of the upcoming release Meenakshi Sundareshwar starring Abhimanyu Dassani and Sanya Malhotra have released the trailer. The film helmed by Vivek Soni is set to premiere on Netflix from November 5. The Diwali festivities are going to turn special as the lead pair is set to bring forth a unique and quirky story of a new age couple.

The splendid trailer of the film shows the concept of an arranged marriage between Sanya Malhotra and Abhimanyu Dassani’s characters. The couple addresses their hopes, dreams, and insecurities and tries to make their marriage work. However, Abhimanyu finds a job in Bangalore while Sanya is stuck in their hometown in Madurai. The two struggle to make their long-distance relationship work. How they strive hard to make their relationship work despite many hardships makes it the crux of the story.

The trailer shows Abhimanyu’s character as an engineer who has the habit of never giving up while Sanya’s character is that of an ardent fan of superstar Rajinikanth. As the two embark on a new journey, with miles apart from each other, misunderstanding, insecurity creeps in, leaving them in a troubling situation. Talking about the film, Sanya Malhotra in a statement said, “Returning to Netflix with Meenakshi Sundareshwar is like a homecoming for me after Pagglait and Ludo. Working with Abhimanyu under the direction of Vivek has been a great experience. I’m glad this film will be released on Netflix to a global audience because the film offers something for everybody, and audiences all over the world will find the film appealing and will relate to it.”

The Badhai Ho actor shared the trailer on Instagram and wrote, “Meenakshi Sundareshwar Trailer Out. Sundar ko dekhte hi pata chal gaya tha. He’s the one for me! But would distance change that? #MeenakshiSundareshwar coming to Netflix on November 5.”  Earlier, the makers had shared the teaser of the film that spoke about the trials and tribulations of a young couple, Meenakshi and Sundareshwar. However, soon after the teaser launch, many South Indians had objected to the way their culture has been stereotyped once again by a Hindi movie. Some had even mentioned how Tamilian don't ‘speak like this or have a shrine for actor Rajinikanth at their home.