Bollywood actor Sushant Singh Rajput is one of the talented actors in the film fraternity and has successfully carved a niche for himself by giving some stellar performance. Buzz is that he is dating actress Rhea Chakraborty

Bollywood actor Sushant Singh Rajput is one of the talented actors in the film fraternity and has successfully carved a niche for himself by giving some stellar performance.
The actor is not only known for his professional comments but is currently making headlines for his personal life, as he is rumoured to be dating actress Rhea Chakraborty. While none of them have come out in the open about their relationship status, their relationship status is sure to grab your attention.

Sushant recently shared a picture on the photo-sharing app and Rhea wasn't far behind from leaving a comment on it. She wrote, "#doorbeen aur pass bhi", to which Rajput replied saying, "hahaha 🔥"

Ever since the banter, netizens have been wondering if the duo is seeing each other and if they are the newest couple in B-town. Interestingly, Rajput and Chakraborty are also holidaying in Leh, Ladakh together. Read some of the reactions below: 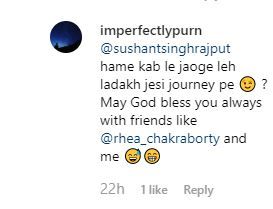 Below are pictures from their trip to Leh, Ladakh:

An ounce of innocence, a pinch of laughter. #ladakh

On the professional front, Sushant Singh Rajput's next projects include 'Drive', an upcoming action drama film, and a remake of the 2011 American film 'Drive'. It is directed by Tarun Mansukhani and produced by Karan Johar. Jacqueline Fernandez, Vikramjeet Virk, Pankaj Tripathi, Boman Irani and Sapna Pabbi will be seen alongside Sushant. The film was earlier announced to release on 7 September 2018, but was later pushed to 28 June 2019.

Apart from this, Sushant will also be seen in 'Chhichhore', a romantic comedy-drama film directed by Nitesh Tiwari and produced by Sajid Nadiadwala under the banner of Nadiadwala Grandson Entertainment. The film is scheduled to be released on 30 August 2019. The film also stars Shraddha Kapoor, Prateik Babbar, Siddharth Narayan, Varun Sharma, Tahir Raj Bhasin among others.

PEOPLE HAVE PLEDGED SO FAR
#Panipuri challenge gets spiced up as Bollywood celebs gorge on different flavours
Anusha Dandekar teaches how to do summer makeup through this tutorial video
Taapsee Pannu explains why 'just' one slap was enough for the film
Hrithik Roshan pokes fun at his abs and 'tanhai' all in one shirtless pic
Kajol & other 'devis' look ready to take on the world in this new poster
DO NOT MISS
MNS THREATENS WARIS PATHAN
MEA: ABRAHAMS SENT BACK 'IZZAT SE'
ACTIVIST HECKLED OUT OF RALLY
BJP TAKES AIM AT SHIV SENA
WHOSE BOWLING ACTION BEST?
ZUCKERBERG GETS ARMPITS BLOW-DRIED