On Friday morning, Rakul Preet Singh took to her Instagram to share a few pictures from her yoga sessions. She calls it her best morning. Read on to know more

Rakul Preet Singh, who started her acting career with a Kannada film Gilli is now a popular star in the south film industry. Her roles in films like Venkadari Express, Spyder and Theeran Adhigaaram Ondru garnered positive appreciation from her fans. She paved her way into the Bollywood industry with her debut in the 2014 film Yaariyan, alongside Himansh Kohli. Besides acting, the Aiyaary actor also loves to perform yoga, as revealed by her in many interviews. On Friday morning, she took to her Instagram to share a few of her work-out pictures.

According to Rakul Preet Singh’s yoga instructor’s posts on social media, Rakul has an immense passion for performing yoga on a regular basis. In an interview with an entertaining portal, Rakul revealed that she loves to work out and also likes to shock her system with new exercises. Sharing about her fitness regime, she said she does not like to begin her day without exercise or yoga. In a few videos that have been circulating on the internet, the actor is seen performing aerial yoga too. On Friday morning, the actor shared her 6 am yoga session pictures on Instagram. In it, she is seen performing Malasana, series of Asanas, Pigeon for hip flexors and many more yoga positions. She has reposted her trainer’s photograph and captioned it saying, “ Best mornings.” Rakul has given some major fitness goals to her fans. See her pictures.

Read | Rakul Preet Singh: Every Time The Actor Jazzed Up The Ramp Walk 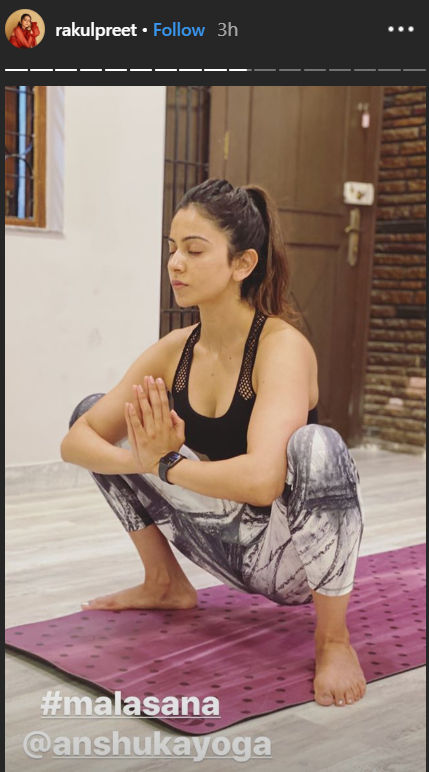 On the professional front, Rakul Preet Singh was last seen in Akiv Ali’s directorial De De Pyaar De, alongside Ajay Devgn. The actor is gearing up for her upcoming flick titled Marjaavaan, alongside Sidharth Malhotra, Riteish Deshmukh and Tara Sutaria. The film is all set to release on November 15, 2019. Marjaavaan is reportedly an action-drama based on the character of Ravana.