Actor Rasika Dugal recently shared an Instagram post, wherein she is seen reading the script of her project. Here, she also explains the meaning of 'scriptic'.

Rasika Dugal recently shared glimpses of her ongoing shoot for her next project. On Mar 20, the actor took to her Instagram handle and shared her pics, wherein she is seen reading the script. Sharing these pictures on social media, Rasika Dugal curiously asked in the caption, "Are you a scriptic?". Talking further about it, Rasika Dugal said, "Scriptic/Scryptic. A person who is constantly trying to decode a script and usually dissatisfied with the result".

Rasika Duggal explains what it is 'scriptic'

As seen in Rasika Dugal's Instagram post, the actor shared three pictures from the sets of her next project. She is seen wearing a grey sweatshirt, paired with black pants. Here, as you swipe to the right, you can see Rasika Dugal's quirky and weird expression, while she reads the script. Seeing Rasika Dugal's photos, it can be said that the actor surely is a 'Scriptic/Scryptic' person.

Fans and followers of Rasika Dugal were quick to share their responses to the actor Instagram post. Actors like Amruta Subhash and Sahil Salathia commented on Rasika Dugal's photos. While Amruta dropped kissing and hugging emojis, Sahil wrote, "3rd pic.. yeh kya likha hain?! Writin’ is not upto the mark" (3rd pic.. what is this written?! Writin’ is not upto the mark).

READ | Rasika Dugal's net worth, income and more to know on the 'Out Of Love' star's birthday

One of the users commented, "Decode a script like CID", while another added, "Hain!!! Ye kya likh dia be ??? Reaction" (what is this written). A fan also speculated, "Lagta hai mirzapur kiscript pad rahi hai bahi rani" (seems like she is reading Mirzapur's script). Check out more fans' reactions below. 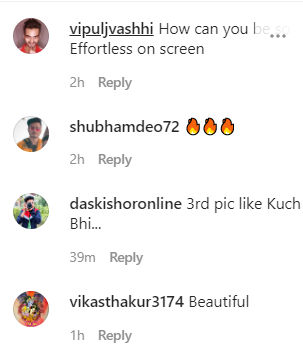 On the work front, the actor is currently gearing up for her upcoming series, OK Computer. This is a comedy and sci series that will premiere on Disney+ Hotstar VIP and Disney+ Hotstar Premium. Slated to release on March 26, it will be available in Hindi, Tamil, Telugu, Bengali, Malayalam, Marathi, and Kannada. OK Computer stars Vijay Varma, Radhika Apte, Rasika Dugal, Kani Kusruti, Ullas Mohan, Ratnabali Bhattacharjee, Jackie Shroff among many others.