Raveena Tandon took to her social media to post a series of throwback pictures from a vacation that she took in the mountains. While many took to the comments section to adore the actor, a fan chose to propose marriage in the next birth. Tandon had a hilarious response for the fan.

Raveena Tandon's response to a fan who proposed marriage

Sharing the posts on her social media, Raveena Tandon is seen enjoying a vacation in snow-capped mountains. While she shared a few solo pictures, she is also seen adorably posing next to her husband in the pictures. Tandon captioned the post, " #throwback When the summer gets to hot to handle... my heart dreaming of snowy vacays, soft, fresh snowed in slopes and the icy moon.. disclaimer- always in #fauxfur". [sic] 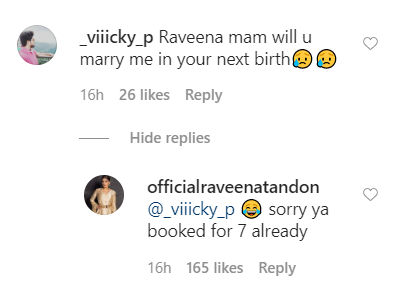 One user wrote, "Every time I see you, I fall in love with you once again". Calling Raveena Tandon a Queen, another fan commented, "You always be a queen, love you". While Tandon's fan club seems to be growing day by day, her fandom also includes a celeb admirer, Rapper Badshah. During a recent interaction with his fans on his Instagram, the rapper revealed that he has a crush on Raveena.

ALSO READ | Raveena Tandon Turns The 'beauty Mode' On And Goes Back To Being 15; Watch Video

Raveena Tandon, who is spearheading the #JeetegaIndiaJeetengeHum campaign, is also actively urging her fans to treat healthcare workers with respect. Feeling disillusioned with a video she saw where a doctor was pelted with stones, the actor questioned people stooping to such low levels as human beings in a conversation with a news publication.

PEOPLE HAVE PLEDGED SO FAR
LATEST NEWS
View all
8 hours ago
Directors Abbas & Mustan talk about 'Khiladi Kumar', theatre-OTT debate & the times ahead
11 hours ago
Katrina Kaif and Ranveer Singh to team up for Zoya Akhtar's next untitled film
11 hours ago
'I have zero recollection..': Deepika Padukone's 'happy weekend' boomerang can't be missed