Rishi Kapoor accompanied by his wife Neetu Kapoor landed in Mumbai in wee hours of the morning and to mark the occasion, he hit out a tweet on social media

Veteran actor Rishi Kapoor accompanied by his wife Neetu Kapoor landed in Mumbai in wee hours of the morning. Kapoor was in New York City for about 11 months as he was undergoing treatment for cancer. As soon as he landed, Rishi Kapoor in all excitement took to Twitter and hit out his first post after coming back to Mumbai.

The veteran actor took to Twitter and exclaimed that he is finally back home and that he was in New York City for about 11 months and 11 days.

Ever since the tweet has been posted, it has gained some major traction. Fans, audiences, and Bollywood celebrities took to comment section to welcome the 'Rajma Chawal' actor back home. "Welcome back", "So happy for you", "God bless you", read some of them. Take a look-

Welcome back to the Bay, Sir and hope you are allowed to rest, not be tired out by all of us who have missed you for the past year! Warmest jhappiyaan to Neetuji and you, and looking forward to a chai-poha-chit-chat-session aaraam se! 🙏🏻 🤗♥️🤗🙏🏻

In the pictures that have been shared, Rishi can be seen all smiles, looking completely hail and hearty. The two can be seen twinning in black and smiling away as they pose for the shutterbugs. 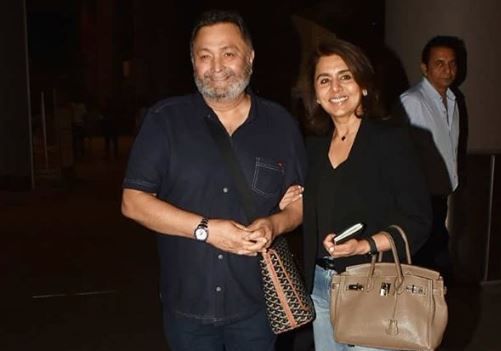 Rishi Kapoor moved to New York owing to his treatment for cancer. During his stay in the West, he is visited by a slew of Bollywood celebrities including Karan Johar, Vicky Kaushal, Boman Irani, Deepika Padukone, Aamir Khan, Alia Bhatt, Priyanka Chopra, Sonali Bendre, and Javed Akhtar. The actor recently attended the launch of Anupam Kher's autobiography 'Lessons Life Taught Me, Unknowingly' along with wife Neetu Kapoor in New York.

Rishi Kapoor was last seen in the film, 'Jhootha Kahin Ka' on July 19, and that was his comeback to the big screens after 'Kapoor & sons', that released in 2017. He also made his Netflix debut with the film, 'Rajma Chawal'.