Saina: Parineeti Chopra's coach will be played by the critically acclaimed actor Manav Kaul. As he shared the first look, Saina Nehwal called it 'amazing'.

Athletes might be blessed with immense talent or work their way up through sheer determination. However, they are almost incomplete without a coach. Legendary cricketer Sachin Tendulkar crediting his coach Ramakant Acharekar for his success, and the popularity of his ‘1 rupee’ anecdote, shows what the role of a coach in a sportsperson’s life is. Similarly, there is one man behind the successes of two badminton superstars of our country, Saina Nehwal and PV Sindhu. Pullela Gopichand is honing the skills of the players after making the country proud himself in his playing days. With the biopic on Saina Nehwal currently underway, it’s impossible to showcase the story without depicting the coach. For Parineeti Chopra, the mentor and guidance is all set to be in the form of Manav Kaul. The choice of the critically acclaimed actor for the role, even delighted Saina Nehwal, who termed it as ‘amazing.’

Manav Kaul shared his first look as Saina Nehwal aka Parineeti Chopra’s coach on Tuesday. He captioned the post, “My first look as @nehwalsaina ‘a Coach (respect 🙏🏼) #SainaNehwalBiopic ... hard working @parineetichopra as Saina Nehwal... Directed by #AmoleGupte Produced by @itsbhushankumarofficial.” Be it the focus in his stance, showcasing the posture while hitting the shuttlecock or conveying his instructions through his racquet and stern expressions, Manav Kaul looked extremely convincing. However, there has been no mention of Pullella Gopichand in his introduction. It would be interesting to know what Pullella Gopichand has to say about Manav Kaul taking up this role.

READ: Parineeti Chopra Walks Out Of Ajay Devgn's 'Bhuj: The Pride Of India'

Even Saina Nehwal was impressed and wrote, ‘amazing.’ Manav then responded, “@nehwalsaina you have an amazing story to tell ... I feel very lucky to be part of #sainanehwalbiopic ☺️🙏🏼thank you ... respect 🙏🏼.” Manav Kaul is well-known for his roles in movies like  Kai Po Che!, CityLights ,Tumhari Sulu, among others and is mostly appreciated for his performances. 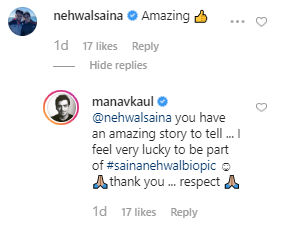 The shooting of Saina is currently going on. Parineeti Chopra has been sharing updates of the film regularly. She had posted snaps with Saina Nehwal, quipping about her homework before meeting the Olympics bronze medallist and more. The Ishaqzaade star is currently in the news for injuring her neck during the shooting.  She is presently recovering with the help of physiotherapy.