Salman Khan wished Neil Nitin Mukesh and his brother for Bypass Road. He called Neil his 'half brother from PRDP' and the latter a 'man of three words.'

At an awards show a few years ago, Neil Nitin Mukesh had fumed at a gag by Shah Rukh Khan and Saif Ali Khan over his name. While jokes on Neil's full name not having a conventional surname are common, even Salman Khan mentioned it while he conveyed his best wishes to Neil Nitin Mukesh for his upcoming film Bypass Road. Praising his ‘half-brother’ from the movie Prem Ratan Dhan Payo, Salman not just wished Neil, but also another ‘man of three words’, Naman Nitin Mukesh, who is making his directorial debut with Bypass Road. The Dabangg star hoped that the duo makes their grandfather and father, both singers, Mukesh and Nitin Mukesh, proud with their latest collaboration.

Salman Khan conveyed his best wishes to the brother duo on Twitter, sharing the trailer link and writing, “My half brother of PRDP's brother, again a man of 3 names, has made a movie with my half brother of PRDP. Saw the trailer.. v interesting! Best of luck to @NamanNMukesh n @NeilNMukesh May u make your father n grand father proud n win lots of hearts.” 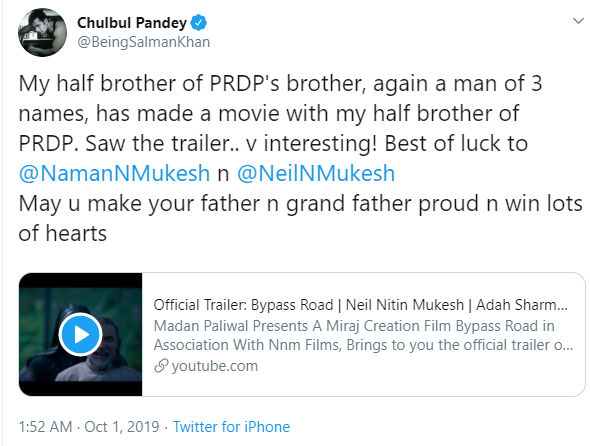 The trailer of Bypass Road was unveiled on Tuesday and immediately went to the top of the Twitter trends.  The movie got recognised for its content and several celebrities tweeted praises for the movie. Neil Nitin Mukesh also turns a writer with his one, and plays the role of a man who gets paralysed and is confined to a wheelchair after his girlfriend is killed. The movie also stars Shama Sikandar, Gul Panag, Adah Sharma, Rajit Kapur and Manish Chaudhari. The film is gearing up for release on November 1.

Neil and Salman have only done film together, Prem Ratan Dhan Payo. The film, directed by Sooraj Barjatya and also starring Sonam Kapoor, was a big success at the box office, when it had released on Diwali in 2015.

Meanwhile, Salman is also gearing up for the release of his film Dabangg 3, sharing a teaser on Tuesday. The movie, directed by Prabhudeva and also starring Sonakshi Sinha and Saiee Manjrekar, will hit the screens on Christmas.