Actor Sara Ali Khan took to her social media stories on May 18 to share a picture of brownies and mangoes and was ready to take on the Monday blues with it.

With lockdown 4.0 in effect, people now need a new motivation to take on the coming days. It seems like Sara is doing just that. She has been doing her best to enjoy her quarantine with brother Ibrahim Ali Khan and mom Amrita Singh. Judging from her social media, it seems like Sara Ali Khan is upskilling her cooking abilities amid the quarantine. Read further ahead to know more details: 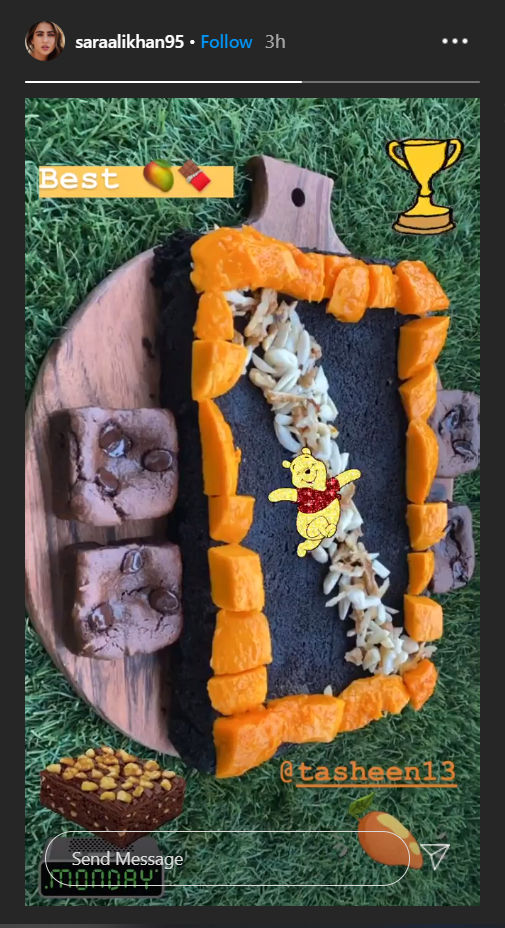 She took to her social media stories early morning on Monday to share a picture of a yummy batch of brownies lined with delicious mango slices and dry fruits. The Kedarnath actor wrote, "Best" across the picture.

Apart from this, Sara Ali Khan is quite busy making hilarious videos with Ibrahim and often digs into her archives to share amazing throwback pictures with her fans. She recently shared a series of pictures with her childhood friends, right from their pictures as kids to their pictures as grownups. The actor captioned the post, "Through thick and thin (Literally ðŸ£ðŸ¥ðŸ‘§ðŸ»ðŸ‘©ðŸ»ðŸŽƒ) Known you for 8,395 Din... ðŸ—“
Thick as thieves, close as KinðŸ’“ðŸ‘­
If you two are my friends I’ll always Win ðŸ‘‘ @ishroff @vedikapinto". [sic]

ALSO READ | 'No One Like My Mom': Sara Ali Khan Showers Love On Her 'OG Propah Lady' Amrita Singh

The actor seems to miss being at work amid the quarantine. She also shared a collage where she is holding the clapboards for her films. She captioned the post, "Missing being a #working #woman on a #working #wednesday ðŸ¤¦ðŸ»‍â™€ï¸ðŸ¤·‍â™€ï¸ðŸ˜¢ðŸ™ˆðŸ”™ But for now- I’m a cook, cleaner, binge tv watcher, nerdy reader, annoying sister, needy daughter, responsible citizen and hopeful human ðŸ™ðŸ» #stayhome #staysafe #staypositive ðŸ¡ðŸ’Ÿâ˜®ï¸". [sic]

On the work front, Sara Ali Khan was last seen in Love Aaj Kal alongside Kartik Aaryan. Directed by Imtiaz Ali, this film was a retake on the director's 2009 film of the same title starring Deepika Padukone and Saif Ali Khan. The 2020 version also starred Randeep Hooda and Arushi Sharma.

The actor has two other films in the pipeline for her upcoming projects. She will be seen in Atrangi Re which is set for a 2021 release. Directed by Aanand L. Rai, the film will also star Dhanush, Akshay Kumar, and Nimrat Kaur.

Sara Ali Khan will also be seen in Coolie No.1 alongside Varun Dhawan. Directed by David Dhawan. Sara will be seen playing the character of Malti in the film. It is set to be a remake of the 1995 comedy film of the same title which starred Govinda and Karisma Kapoor in the lead roles.

PEOPLE HAVE PLEDGED SO FAR
LATEST NEWS
View all
50 mins ago
Tiger shroff shares video of him performing stunts, reveals he is scared of heights
16 mins ago
Kareena kapoor or shraddha kapoor: who wore the similar black pantsuit better?
30 mins ago
Salman khan provides food kits to over 5,000 families on occasion of eid