The news of the Bollywood power couple, Deepika Padukone and Ranveer Singh enjoying dinner with Indian shuttler PV Sindhu went viral on social media. Ranveer Singh took to his Instagram account to share a picture of the trio smiling from ear to ear. They were also captured while leaving the restaurant in Mumbai.

Ranveer Singh took to his social media account to share a picture from his ‘smashing time’ with Deepika Padukone and PV Sindhu. The badminton star won a bronze medal for India at the Tokyo Olympics and made the country proud. She also won a silver medal at the 2016 Rio Olympics. She headed to her Instagram account and posted the same picture as Ranveer Singh, while writing, “The smiles on our faces show what a fun time we had.”

PV Sindhu took to the comments section of the post and left a message for the Bollywood duo. She tagged them and mentioned that it was ‘lovely’ spending time with them. She wrote, “Lovely spending time with you guys. Looking forward to seeing you soon.”

Ranveer Singh also put up the same picture in his story and wrote, “Laakhon mein ek”, which translated to English means, ‘One in a million.’ The Olympic star reshared the story and added a sticker to it, which read, ‘Favourite people’. 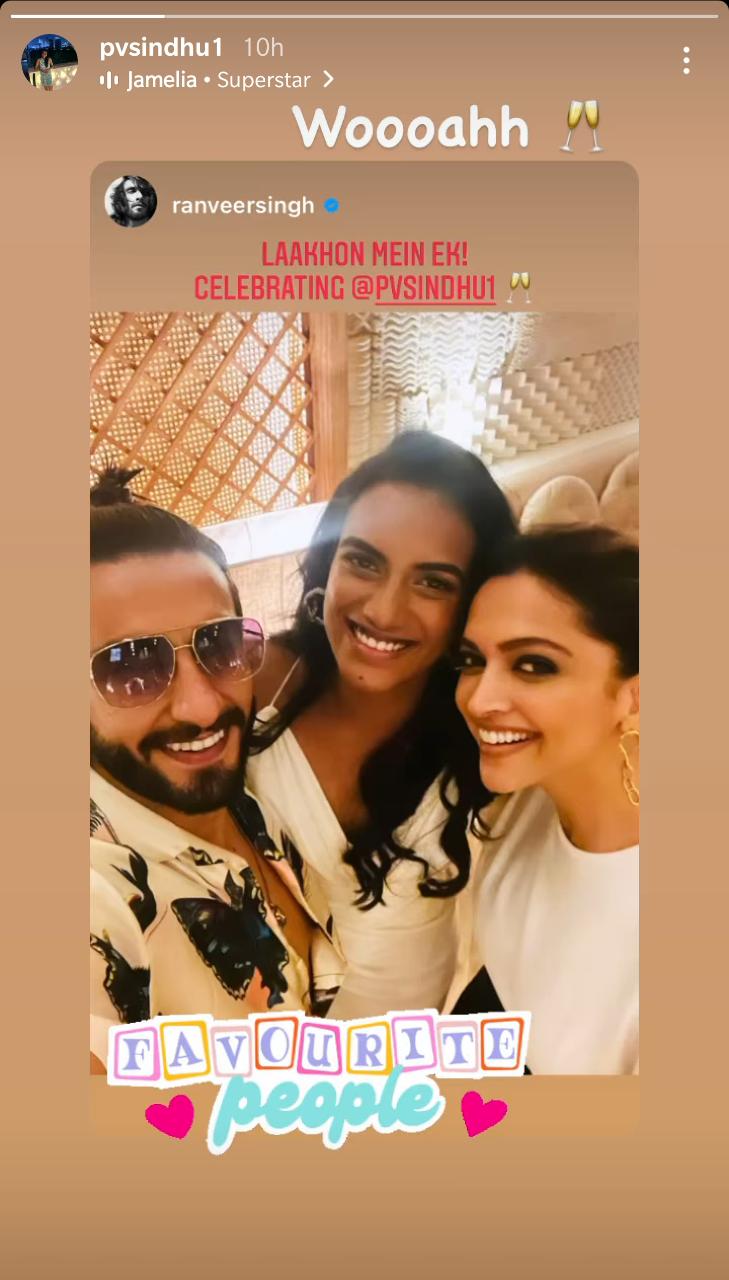 The lovely Ranveer Singh-Deepika Padukone will soon be seen on the screen together yet again. They will star in 83, a sports drama based on India’s World Cup win in 1983. Singh will take on the role of Kapil Dev, while Padukone will play his wife, Romi Dev.

Apart from 83, Ranveer Singh will reunite with his Gully Boy co-star Alia Bhatt for Rocky Aur Rani Ki Prem Kahani. The film will also feature Dharmendra, Jaya Bachchan and Shabana Azmi. Singh will also star in Jayeshbhai Jordaar and Cirkus. Deepika Padukone on the other hand will star opposite Hrithik Roshan in Fighter, which will be India’s first aerial action franchise. She will also take on a role in Pathan and in the Indian adaptation of The Intern, which will star Amitabh Bachchan.