Sonakshi Sinha hit back at a troll after his comment on her quirky wish for her father Shatrughan Sinha on the occasion of his 72nd birthday.

Sonakshi Sinha hit back at a troll after his comment on her quirky wish for her father Shatrughan Sinha on the occasion of his 72nd birthday.

The actress had wished her father, sharing a snap from more than two decades ago when she is seen being a ‘little reflection’ of her father standing behind him, as he delivered a speech on a stage. Quipping about her dress in the picture, the ‘Rowdy Rathore’ star asked him how he allowed her mother dress her up in that fashion when he loved his daughter so much.

READ: Sonakshi Sinha Has An Important Question For Shatrughan Sinha As She Hilariously Conveys Birthday Wishes To Him With A Throwback Picture

Happy birthday pops! Ill always be your little reflection. You say you love me the most and I’ll never understand why you let Maa dress me up like this, but ill let it go today.

The actress was not pleased with the post and sharing the screenshot of his message, she expressing her irritation with a GIF and wrote, “Bro chill im just wishing my dad happy birthday. (sic)”

It's common for trolls to spring up in almost all of the celebrities' posts, but rarely do the stars hit back and it's always a fun sight when they do. 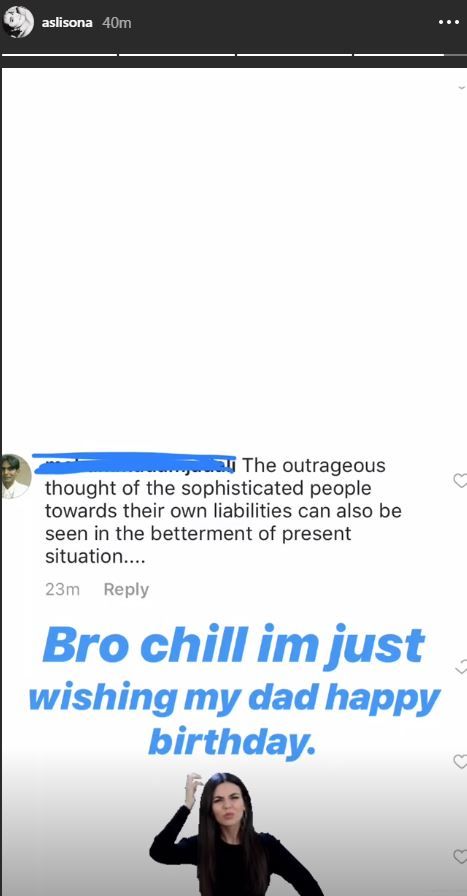 On the professional front, Sonakshi was seen in three movies this year,  'Welcome to New York' and ‘Happy Phirr Bhag Jayegi', apart from a cameo in ‘ Yamla Pagla Deewana: Phir Se.’